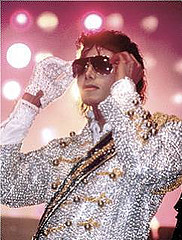 Clearly Michael Jackson will leave his mark. He might not on those young enough for whom their memories of Jackson are of a bizarre Neverland, of a baby hanging out a window, of a bed inappropriately crowded with children. But those of us who lugged our boom boxes to school to play “Thriller” and “Beat It” on cassette tape during recess, we are the ones who know the impact that the troubled but absolutely brilliant artist had on our lives. Still, since Jackson’s brilliance changed music, he’ll leave tracks on anyone who’s every moonwalked, breakdanced, or rhymed in the cadence and pitch that made him, well, the King of Pop. Anyone who grooves to an iPod, you have Michael to thank somehow.

On a less eulogic note (and there will be oh-so-many retrospectives), this news is already rocking the headlines and leaving everything else (even Farrah) in its dust. As Andrew Sullivan points out, there goes cable coverage of Iran. And now Mark Sanford doesn’t have to worry about gracing the cover of any of the weekly tabs. He and his too-much-information emails can fade to black now (and we don’t even have to worry about whether it’s okay that the governor of South Carolina doesn’t know the difference between a whirlwind and a “world wind“).

Favorite Michael song of all time? “We are the World” was iconic, the whole Thriller album had the dance beats (“PYT,” “Human Nature,” etc.) people still cling to, but my pick is “Man in the Mirror.” Maybe because to me it feels most ironic, and most honest.