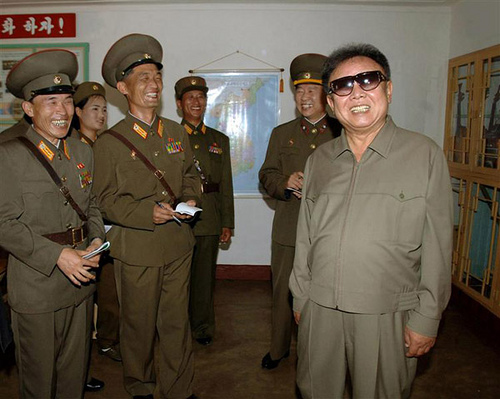 Things are all smiles in North Korea. At least that’s the impression you get from Kim Jong Nam, eldest son of the “Dear Leader,” Kim Jong Il. His father has suffered a stroke, but remains at the helm of his fantasy land, while a secret transition of power is underway. Such things are touchy subjects in countries like the Hermit Kingdom, where leaders are not so much political figures as living gods. Pyongyang has indicated that Kim Jong Il’s youngest son, Jong Un, is likely to inherit the mantle of the North Korea’s national deity.

Does this trouble Kim Jong Nam? Not at all! He knows the score. Reports indicate he fell out of favor after being caught in Tokyo’s international airport with a fake passport in 2001. Rumors abound that he fled North Korea, but even this is unconfirmed. To hear him tell it, he’s just a traveling man, a pleasure seeker untroubled at being passed over by his loving father. A Japanese television crew caught up with him earlier this week, where Nam smiled as he denied his defection to Japan and brushed aside any hard feelings at his father. “Sorry, I am not interested in the politics,” he says. You can watch the interview on the BBC’s website.