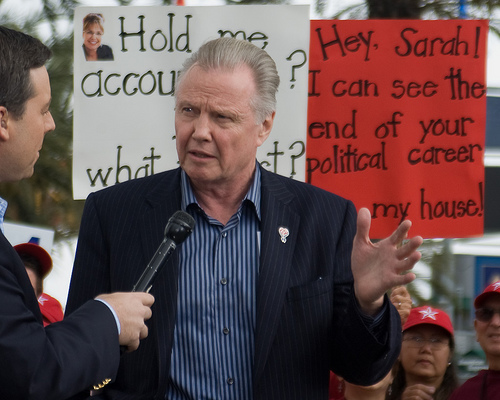 Jon Voight is a brilliant character actor. More than that, he shares responsiblity for Angelina Jolie, for which we are all eternally grateful. But he’s also a committed conservative, a diehard Israel booster, and a guy who’s not afraid to let you know it. His most recent role as arch-villian Jonas Hodges (a comically evil version of Erik Prince) on the Fox show 24 is just another acting job, of course, but may not be that far off from reality. The Midnight Cowboy was a featured speaker at Tuesday’s Senate House Dinner, a GOP fundraiser, where he held forth before party luminaries like Sarah Palin and Newt Gingrich. Needless to say, he’s not a fan of our new president.

From the UK’s Daily Mail:

He said: ‘It was amazing to me how the media and the young generation were taken in by Obama’s false haloistic presence… Obama as a candidate portrayed himself as a moderate, but turned out to be wildly radical.”

… With an audience that included Vice President candidate Sarah Palin and former House speaker Newt Gingrich, Voight said: ‘We were the great power of good for the world and we were the liberators of the entire world. We are becoming a weak nation.

‘Obama really thinks he is the soft-spoken Julius Caesar. Republicans need to find their way back to power to free the nation from “this Obama oppression”.’

Naming various Democrats, he said they can be blamed for the ‘downfall of this country’.

And when it comes to former President Bush, Voight has nothing but warm and fuzzies. Bush was simply a victim of a liberal conspiracy. Says Voight:

“The Democrats fulfilled their mission to paint President Bush as a war-monger and once they were able to reach all the youth in colleges and on the internet with this lie, painting him as ‘the evil one’, never giving him credit for keeping our country safe, once they had established that is was easy to bring in ‘the one’ as Oprah Winfrey crowned him.”

As for Palin, she was a bit friendler towards of Obama, saying, “He’s a very nice man… but pay attention to his policies.” For footage of Voight’s tirade, click here.