The new issue of Dispatches is out! This time around the dense, book-sized magazine takes on Poverty. Um, a broad topic to be sure, but given the mag’s already hardy reputation for taking on massive, country-sized subjects, like “Iraq” and “Russia,” “Poverty” is likely to deliver the goods. 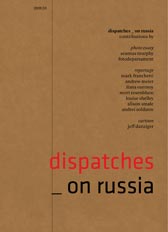 In their last issue, Dispatches tackled Russia largely by focusing on Putin. (How can you not?) “On Russia” includes essays on Putin & power (by Mark Franchetti), the country’s push to be an energy superpower (by Andrew Meier) the FSB (by Andrei Soldatov), the Putin Youth movement (by Ilana Ozernoy) and, tied more loosely to Putin (because everything in Russia today is somehow tied to the man), the flourishing of computer hackers and the non-punishment of organized crime.

Of course, being a magazine cofounded by VII founding member Gary Knight, Dispatches always features an ample amount of photography. “On Russia” showcases Seamus Murphy’s “East of the Sun” and wonderful collection of Russian photos from 1860 – 2008, curated by Olga Korsunova, Nadya Sheremetova, and Yuri Kozyrev.

There’s a lot to digest.

As a side note, if you sign up for a subscription to Dispatches before Monday, June 15th (hurry!) you have the chance to win an Antonin Kratochvil print from his project “In God’s Country.”

While you’re over at the Dispatches website, be sure to check out the video of a conversation between Susan Meiselas, Gary Knight and Tim Hetherington on War & Photography. They aren’t just some of the best photographers of our day rehashing old stories, but some of the smartest photographers digging into a highly charged subject.

Also, don’t miss former World Press Photo secretary (and current VII Photo Managing Director) Stephen Mayes’ essay on the state of photojournalism, from last April, but every bit as poignant today, a year later. And while you’re at it, if you have 45 minutes to kill, listen to his exceptionally insightful speech from this year’s World Press Foundation awards ceremony, hosted on the Lens Culture website. The takeaway quote (paraphrased): “90% of photos show only 10% of the world.” His list of done-to-death photo essay subject rings particular true to these ears.

Speaking of World Press Photo, the new annual will be available soon (entrants have received copies), with selections from this year’s winning entries. Always a must-see.

While World Press represents the best of the established, working photojournalism community, Magnum photographer David Allen Harvey’s online-only BURN magazine has created a healthy $10,000 emerging photographer grant. The finalists are on the site now. Winning entry to be announced at the LOOK3 Festival of the Photography in Charlottesville, Virginia, this weekend.

The LOOK3 festival has emerged as one of the best photo festivals in the US. Wish I were there to give a first-hand account of the going-ons this weekend. I hear that the Luceo Images gang (including Mother Jones contributing photography Matt Eich) is there in force, getting a fair amount of attention.

With workshops by Brian Storm (of MediaStorm), Eugene Richards, David Allan Harvey, Larry Fink and James Nachtwey, exhibits by Martin Parr, Gilles Peress, Paolo Pellegrin, World Press Photo, POYi, Redux’s American Youth project and lots more, saying the LOOK3 festival gives you plenty of bang for your buck would be an understatement. Word is they’re taking a hiatus next year, so if you can make it this week, it’ll be worth the effort.

Alright, that should hold you till next week’s snapshot.