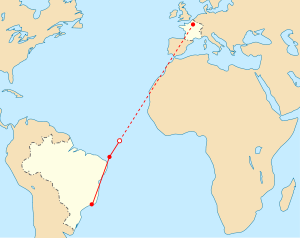 Since Monday, the Brazilian navy and air force have been focused on finding what’s left of Air France Flight 447. But in trying to get government officials to comment on the crash, I’ve been met with only one answer: According to international regulations, it is France’s responsibility to determine the cause of the accident, not Brazil’s. Was it caused by the storm? An equipment problem? Answering that is France’s job, Brazilian officials repeat over and over again.

Frustratingly, France doesn’t have any leads either. Air France has ruled out the possibility of the plane having left Rio with some kind of technical problem. Other than that, there seems to be no information. The black boxes could be as far as three miles down into the water, in an area full of rock formations and subject to unpredictable weather. The head of France’s accident investigation agency Paul-Louis Arslanian says they may never be found.

But the optimistic Brazilian president Luiz Inacio Lula da Silva disagrees. “A country that can find petroleum at a depth of six thousand meters (3.7 miles) can find an airplane at two thousand meters (1.2 miles),” he said from Guatemala City.

Guest contributor Gabriela Lessa is a journalist and blogger spending the summer in her native Brazil. Watch for her regular dispatches over the next few months on MotherJones.com.