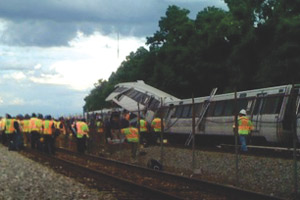 The latest numbers have at least seven people dead and dozens more injured in the terrible rush-hour crash on the Washington Metro’s Red Line (see David Corn’s photos from the scene here).

There’s been no official word yet about what caused the crash. But here’s a roundup of some possibilities.

Metro was designed with a fail-safe computerized signal system that is supposed to prevent trains from colliding. The agency’s trains are run by onboard computers that control speed and braking. Another electronic system detects the position of trains to maintain a safe distance between them. If they get too close, the computers automatically apply the brakes, stopping the trains. These systems were supposed to make yesterday’s crash impossible.

This isn’t the first time the Metro’s signal systems have failed–the Post documents several others. The computerized system was also shut down for a year and a half in 1999 to 2000, and the system run manually by train operators, because repairs were needed on the communications relays that are also supposed to prevent trains from coming close enough to collide:

During the past decade, Metro has struggled with troublesome communications relays. The agency tore out all 20,000 trackside relays in 1999 after discovering that a small portion designed to last 70 years were failing after 25. They sent erroneous instructions to trains on several occasions. One train was told to travel 45 mph on a stretch of track with a 15-mph speed limit; another was directed to travel at zero mph when it should have been ordered to move at 15 mph. The manufacturer, Alstom Signaling, agreed to replace the relays.

Of course, the driver, who died in the collision, could have stepped on the brakes when the train failed to slow automatically. No one knows, or will probably ever know, why she didn’t. But we can and should find out why the safety system failed.

The New York Times story on the crash quoted Peter Goelz, former managing director of the National Transportation Safety Board, who said: “This is an aging system and one that needs to be looked at very closely.”

An aging system? The Washington Metro began operation, after numerous delays, in 1976, and to date at least a dozen riders have been killed. (Three died in a 1982 derailment.) The New York City subway–which operates 24 hours a day and carries more riders than all other U.S. rail mass transit systems combined–has been running since 1904, with about 30 riders killed in 105 years, only 7 of them since 1976.

But the D.C. Metro has to contend with something that other urban mass transit systems do not: the United States Congress. Unlike any other subway system, the DC Metro has no dedicated source of funding, but instead must rely on the whims of lawmakers to appropriate money—and often those lawmakers are more interested in playing to their own constituents than taking care of the District’s needs. One alert commenter on the Daily Kos blog last night linked to a local WTOP radio story from last September:

Worn-out and run down, the Metro system is in disrepair. The transit agency’s financial troubles are well documented, with nearly $500 million needed to fix a list of “urgent unfunded needs” — everything from crumbling platforms to frail track fasteners that are supposed to keep rail lines in place.

But as Metro looks toward Capitol Hill for help, one major roadblock is standing in the way: Sen. Tom Coburn, R-Okla.

Rep. Tom Davis, R-Va., has authored a bill which would provide $1.5 billion for Metro over the next 10 years. If the bill passes, Virginia, Maryland and D.C. have agreed they will match the $1.5 billion. The funds would go a long way for Metro, which is the only major transportation system in the nation that lacks a dedicated source of funding.

But the Davis bill, as it is currently constructed, will likely never make its way past Coburn. “I’m happy to be a roadblock to that bill,” Coburn tells WTOP. “It’s $1.5 billion they want, we (the government) don’t have the money to pay for it, so where are we going to get the money?”

Coburn doesn’t think one penny of funding for Metro should come from American taxpayers. “How dare us say we are going to steal opportunity from our children so that we can have a ride on the Metro. I think the vast majority of Americans would disagree with that.”

David fought for years to get the Metro funding. After a protracted legislative battle, Congress finally approved the money in late 2008, but it took until spring for the district, Maryland and Virgina to work out the practical details for maintaining the Metro that needed to be finalized before the money could be appropriated. Reuters yesterday provided an update on the current state of the Metro’s infrastructure and finances:

The U.S. recession has forced Metro to cut its operating budgets this fiscal year by 10 percent, freeze hiring and end outside contracts. Last month, it had to tap reserves to close a funding gap for fiscal year 2010 that at one point was projected to reach $154 million.

At least when there are problems on the New York City subway, whether they be deadly accidents or daily delays, New Yorkers can look to their own democratically elected officials for redress. Here in the nation’s capital, our lives are in the hands of 535 men and women from Oklahoma, Arkansas, Hawaii, South Carolina, and 46 other states–most of whom travel to Capitol Hill each day in limousines at the taxpayers’ expense, and never set foot on the Metro.