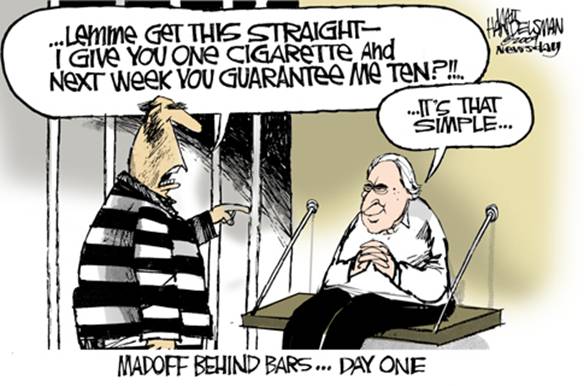 As I was perusing CNN’s headlines this morning, one grabbed my attention: Ex-con: Madoff will be terrified in prison.

We all know that Big Bad Bernie was rewarded with 150 years in the slammer yesterday, but did you know that an ex-con named Larry Levine runs a business dedicated to helping convicts “get out alive” from federal prison?

Larry Levine’s “Wall Street Prison Consultants” is one consulting business that succeeds in inversely proportional rates to the economy. It’s logical that a white-collar banker’s trip to the “pen” isn’t a cakewalk, but Levine has devoted his life to teaching people about the ins and outs of prison etiquette. Levine clearly loves the limelight (as evidenced by his site’s links to his many media appearances), but his inmate testimonials can’t help but make one think that this guy really is something.

Unfortunately for Bernie, Levine’s sense of integrity will keep him from helping the swindler stay safe behind bars. Levine told CNN, “Some people I can help, some people I can’t. Now, I had Madoff’s reps get a hold of me before he went into custody and I turned them down. I wouldn’t help the guy out because I view him as an economic terrorist. If you rip off a bank and insurance company, an institution, that’s an acceptable crime. Bernie hurt people. He hurt people individually and I refuse to help people like that. Let him rot in hell.”