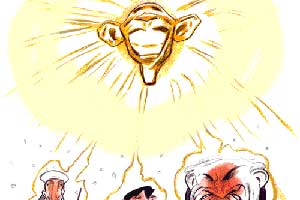 The last few days we and the world have been trying to digest the Obama Cairo Speech. Here’s my two and a half cents.

I think it’s been so hard for people to make out what happened because he did so many things they’d never in their lives seen before. Primarily, I think, it was the sight of the most powerful politician in the world conducting his nation’s business with the premise that pure reason is his best argument. That an appeal to the ability of people involved in tribal, small-bore obsessions to step back and see the large picture for long enough to actually change their behavior. At other times this can be foolhardy statecraft. The bet here is that the world has had enough of the old way and will give a new approach 5 good minutes. By crafting the speech as well as he did, he put the ray of light and heat on the world of Islamic, Iranian, and Israeli resentment and reminded them that their worlds are interconnected. This would only be possible, perhaps, right now and with this president, a man who understands all these worlds, appearing on the barren landscape of the last 9 years. This could change the game. For Netanyahu, he no longer has a US cover for inertia. His government could fall if he deals, so he may calculate falling for a cause may be worth it. Besides, who wants Avigdor Leiberman in your face all the time anyway? For Ahmadinejad, who faces a tough election, Obama removed the polarity, and therefore, perhaps, the oxygen for hate. He may have to go now too. And bin Ladin perhaps, compared to Obama, starts to seem less real. In any case, his show is old and may not get the viewers he used to. I want to blog about the war in Afghanistan, the use of mercenaries, and the murderous (and counterproductive) remote control bombs. It’s time to nail Obama on that and other things. But for now, there must be an acknowledgement of this miracle. A president from the age of reason, telling truth to a candid world, in its own language. I really can’t recall a president doing that. (JFK comes close but would never mention that we have been about overthrowing governments. Well natch.)

In this moment I have to say, as a citizen of Planet Earth, I am very, very proud of him.