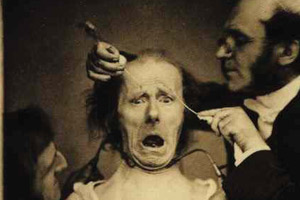 Their stories are a staple of conspiracy culture: broken men, suffering hallucinations and near-total amnesia, who say they are victims of secret government mind-control experiments. Think Liev Schreiber in The Manchurian Candidate or Mel Gibson in Conspiracy Theory. Journalists are a favorite target for the paranoid delusions of this population. So is Gordon Erspamer—and the San Francisco lawyer’s latest case isn’t helping him to fend off the tinfoil-hat crowd. He has filed suit against the CIA and the US Army on behalf of the Vietnam Veterans of America and six former American soldiers who claim they are the real thing: survivors of classified government tests conducted at the Army’s Edgewood Arsenal in Maryland between 1950 and 1975. “I get a lot of calls,” he says. “There are a lot of crazy people out there who think that somebody from Mars is controlling their behavior via radio waves.” But when it comes to Edgewood, “I’m finding that more and more of those stories are true!”

That government scientists conducted human experiments at Edgewood is not in question. “The program involved testing of nerve agents, nerve agent antidotes, psychochemicals, and irritants,” according to a 1994 General Accounting Office (now the Government Accountability Office) report (PDF). At least 7,800 US servicemen served “as laboratory rats or guinea pigs” at Edgewood, alleges Erspamer’s complaint, filed in January in a federal district court in California. The Department of Veterans Affairs has reported that military scientists tested hundreds of chemical and biological substances on them, including VX, tabun, soman, sarin, cyanide, LSD, PCP, and World War I-era blister agents like phosgene and mustard. The full scope of the tests, however, may never be known. As a CIA official explained to the GAO, referring to the agency’s infamous MKULTRA mind-control experiments, “The names of those involved in the tests are not available because names were not recorded or the records were subsequently destroyed.” Besides, said the official, some of the tests involving LSD and other psychochemical drugs “were administered to an undetermined number of people without their knowledge.”

Erspamer’s plaintiffs claim that, although they volunteered for the Edgewood program, they were never adequately informed of the potential risks and continue to suffer debilitating health effects as a result of the experiments. They hope to force the CIA and the Army to admit wrongdoing, inform them of the specific substances they were exposed to, and provide access to subsidized health care to treat their Edgewood-related ailments. Despite what they describe as decades of suffering resulting from their Edgewood experiences, the former soldiers are not seeking monetary damages; a 1950 Supreme Court decision, the Feres case, precludes military personnel from suing the federal government for personal injuries sustained in the line of duty. The CIA’s decision to use military personnel as test subjects followed the court’s decision and is an issue Erspamer plans to raise at trial. “Suddenly, they stopped using civilian subjects and said, ‘Oh, we can get these military guys for free,'” he says. “The government could do whatever it wanted to them without liability. We want to bring that to the attention of the public, because I don’t think most people understand that.” (Asked about Erspamer’s suit, CIA spokeswoman Marie Harf would say only that the agency’s human testing program has “been thoroughly investigated, and the CIA fully cooperated with each of the investigations.”)

Erspamer’s involvement in the case is deeply personal. His father was a government scientist during Operation Crossroads, a series of nuclear tests conducted at Bikini Atoll in the Pacific in the summer of 1946; he was present aboard a research vessel for the “Baker” test, during which a 21-kiloton thermonuclear bomb was detonated 90 feet below water. The blast resulted in massive radioactive contamination. Erspamer’s father and the rest of the ship’s crew, he says, all died in middle age from radiogenic diseases. Erspamer makes his living in the field of energy litigation, but has twice before argued class action suits for veterans—one for soldiers who, like his father, were exposed to radiation during nuclear tests (a case he ultimately lost in a 1992 appellate decision) and more recently one on behalf of Iraq and Afghanistan veterans denied treatment for post-traumatic stress disorder. The case is on appeal in California’s 9th Circuit. “Nobody out there is doing these types of cases,” he says. “It’s really sad because the veterans are left holding the bag, and it’s not a very pretty bag.”

One of those vets is Frank Rochelle. Unlike those of other test veterans, portions of his heavily redacted medical records have survived, providing a rare, if incomplete, account of his experiences. In 1968, while posted at Virginia’s Fort Lee as a 20-year-old Army draftee, he saw a notice calling for volunteers for the Edgewood program. Among the promised incentives were relief from guard duty, the freedom to wear civilian clothes, three-day weekends, and, upon completion, a medal of commendation—all for participation in experiments that, according to the notice, would help the military test a new generation of equipment, clothing, and gas masks. Upon his arrival at the testing facility in Maryland, he says he was asked to sign a series of documents, including a release form and a secrecy agreement. The tests would be risk free, he says he was told, and any drugs given would not exceed normal dosage. Over the next two months, however, he was subjected to three rounds of experiments that, Rochelle says, left him permanently damaged. His medical records indicate that he was exposed to nonlethal incapacitating agents like DHMP and glycolate, both of which act as sedatives that produce hallucinations. In the latter case, Rochelle says he was taken into a gas chamber and strapped to a chair by two men in white lab coats, who affixed a mask to his face and told him to breathe normally. He quickly lost consciousness. According to Erspamer’s complaint, “Over the next two to three days, Frank was hallucinating and high: he thought he was three feet tall, saw animals on the walls, thought he was being pursued by a 6-foot-tall white rabbit, heard people calling his name, thought that all his freckles were bugs under his skin, and used a razor to try to cut these bugs out. No one from the clinical staff intervened on his behalf…”

Medical records indicate that Rochelle went through a third round of testing, but he has no memory of it. For years he’s been having nightmares about the Edgewood tests and now suffers from anxiety, memory loss, sleep apnea, tinnitus, and loss of vision, all of which he claims are direct results of the experiments. Still, he didn’t inform his doctor of the tests until 2006, believing that he was still bound by the oath of secrecy he swore in 1968. (The government finally released human test subjects to speak to their physicians about the tests in June 2006, under the condition that they not “discuss anything that relates to operational information that might reveal chemical or biological warfare vulnerabilities or capabilities.”)

Rochelle’s story is similar to those of Erspamer’s other plaintiffs, all of whom claim to be suffering debilitating health effects stemming from the experiments. Of course, substantiating these claims is a challenge, given that most of the medical records were destroyed upon completion of the program. Rochelle’s records remain intact, but for “others we have less information,” says Erspamer. “We spent a great deal of time on that topic, and we are confident that the plaintiffs are who they say they are, were where they said they were, and got what they said they got,” in terms of exposure to experimental chemicals. “Who bears the burden on that issue when the defendants destroyed the evidence?” Erspamer asks. “They’ve put all that stuff through the shredder.”

Compensation for injuries sustained during human testing of chemical and biological agents is not unprecedented. Last year, more than 350 servicemen who served as test subjects at Porton Down, a secret military research facility where the British government conducted its own series of mind-control experiments, were granted nearly $6 million in compensation in an out-of-court settlement with the UK’s Ministry of Defence. Likewise, in 2004, the Canadian government began offering $18,000 payments to eligible veterans of experiments at its testing facilities. Nevertheless, says Erspamer, “No American soldiers have ever been compensated.” The CIA and the Army “just hope they’re all gonna die off, and they will unless somebody does something.”