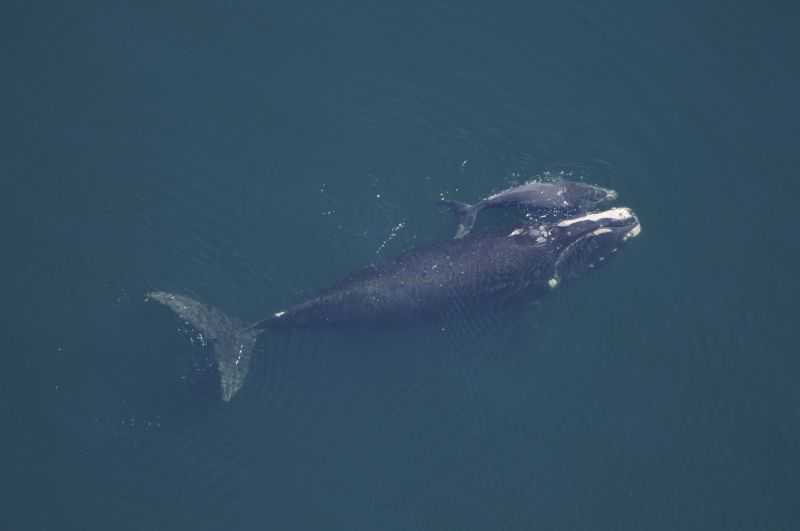 Another good day on the whale front. Scientists have documented the presence of endangered North Atlantic right whales in an area the species was believed extinct.

Although only two right whales have been sighted in the last 50 years at Cape Farewell Ground, the hydrophones located right whales at three widely space sites on the same day. Even three whales is significant since the entire population of North Atlantic right whales is estimated at only 300 to 400 whales. Plus there are likely/hopefully more.

“The technology has enabled us to identify an important unstudied habitat for endangered right whales and raises the possibility that—contrary to general belief—remnant of a central or eastern Atlantic stock of right whales still exists and might be viable,” said David Mellinger of OSU’s Hatfield Marine Science Center.

The discovery is important not least because this is an area that could be opened to shipping if polar ice continues to melt. Slow-moving right whales are extremely vulnerable to collisions with ships.

The pattern of recorded calls suggests that the whales moved from the southwest portion of the region in a northeasterly direction in late July and then returned in September—putting them directly in the path of proposed shipping lanes.

“Newly available shipping lanes through the Northwest Passage would greatly shorten the trip between Europe and East Asia but would likely cross the migratory route of any right whales that occupy the region,” said Phillip Clapham, right whale expert with NOAA’s National Marine Mammal Laboratory, who participated in the study. “It’s vital that we know about right whales in this area in order to effectively avoid ship strikes on what could be a quite fragile population.”

Results of the study were presented this week at a meeting of the Acoustical Society of America in Portland, Oregon.