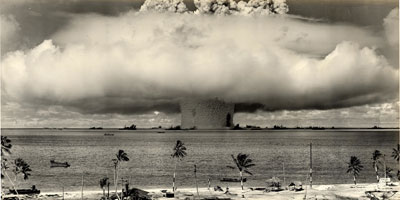 For decades nonproliferation experts have argued that, once unleashed, the nuclear genie cannot be stuffed back in the bottle. But they probably didn’t consider the possibility that a country with nuclear bomb-making know-how might forget how to manufacture a key atomic ingredient. Yet that’s precisely what happened to the US recently, and national security experts say this institutional memory lapse raises serious questions about the federal government’s nuclear weapons management.

In 2007, as the government began overhauling the nation’s stockpile of W76 warheads—the variety often carried by Ohio-class submarines—officials at the National Nuclear Security Administration realized they couldn’t produce an essential material known as “Fogbank.” What purpose this substance actually serves is classified, but outside experts have suggested that it’s a sort of exploding foam that sits between the fission and fusion portions of hydrogen bombs. The Government Accountability Office reported in March that NNSA’s effort to recover its Fogbank-making ability had resulted in a yearlong, $69 million delay in the refurbishment project. And a government official with knowledge of the situation tells Mother Jones that further Fogbank-related delays are imminent.

The US government’s Fogbank snafu has stunned nuclear policy experts. “What the story ought to tell people is that the institutions that we’ve built to oversee development and maintenance of our nuclear weapons are incompetent,” says Jeffrey Lewis, the director of the nuclear strategy and nonproliferation initiative at the New America Foundation, who has written about the episode.

“You have to keep people who know how to do these things and when people get too old or they retire you have to train new people to take their place,” adds Coyle, now a senior adviser to the Center for Defense Information, a Washington think tank. But NNSA failed to do so, according to the GAO. The agency “kept few records of the process when [Fogbank] was made in the 1980s and almost all staff with expertise on production had retired or left the agency” by the 2000s.

In March 2007, the NNSA mounted an all-out effort, dubbed “Code Blue,” to remanufacture Fogbank before a September deadline to finish refurbishing the first W76 warhead. According to the GAO, that effort failed, and it took another year before the NNSA could finally produce its first refurbished warhead. Fogbank-related delays led to significant logistical problems for the Navy, the GAO reports, causing it to put off replacing old W76 warheads with refurbished ones until April—a year after its original goal.

And the Navy may have to wait even longer until its W76 arsenal is shipshape. According to the GAO, the NNSA, after falling behind schedule, adopted an ambitious production plan that required it to produce more weapons per year than it had originally planned. But it now appears that the agency may not be able to keep its deadline, the government official says.

An NNSA spokesman disputed the GAO’s characterization of the situation. “The GAO statement is technically incorrect,” Damien LaVera, the NNSA’s director of public affairs, writes in an email. “We did not commit to an aggressive production schedule to make up for delays in Fogbank.” (Gene Aloise, the director of the GAO’s national resources and environment division, says his office stands by the report.) At the same time, though, LaVera acknowledged that the NNSA is still facing problems with the W76 refurbishment program: “There have been some technical issues that we are working through, but they are not atypical for a production ramp up and would not alone not prevent us from meeting the [Navy’s needs],” he says.

Loren Dealy, a spokeswoman for the House armed services committee, which has investigated the Fogbank matter, said the committee “continues to monitor” the issue.