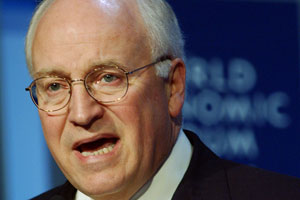 Who in the George W. Bush White House tried to shred a memo challenging the use of torture?

On April 21, Philip Zelikow, who was counselor to Secretary of State Condoleezza Rice during the Bush administration, revealed on Foreign Policy‘s “Shadow Government” blog that he wrote a memo in 2005 disputing the conclusions of Bush Justice Department lawyers that torture was legal. The existence of such a memo was a surprise. But Zelikow also disclosed that the “White House attempted to collect and destroy all copies of my memo.”

This story is not over. Zelikow tells Mother Jones that he doesn’t know for sure who in the White House ordered the suppression of his memo, but he says that his “supposition at the time” was that the office of Vice President Dick Cheney was behind the cover-up. In an email exchange with Mother Jones, Zelikow notes that Cheney’s office did not have the authority to request that his memo be deep-sixed: “They didn’t run the interagency process. Such a request would more likely have come from the White House Counsel’s office or from NSC staff.” But that request did not reach him in written form. “It was conveyed to me, and I ignored it,” Zelikow recalls. But he suspected that Team Cheney was probably behind it.

Zelikow, who is scheduled to testify before a Senate judiciary subcommittee on Tuesday Wednesday, also notes that his memo was not the only one raising questions about the administration’s legal rationale supporting so-called “enhanced interrogation techniques”: “There were a number of papers, mainly arguing for alternative legal frameworks.” But his memo, he adds, was “a more direct assault on [the Bush Justice Department’s] own interpretation of American law.”

(UPDATE: The Senate judiciary subcommittee just formally announced the testimony, which will be on Wednesday, not Tuesday, as earlier reports had indicated.)

Congressional Democrats are already seeking any surviving copies of Zelikow’s memo. They might now also want to request these other papers. (No such documents have been declassified or released so far.)

Cheney’s office was reportedly the hub of the Bush administration’s torture program. And Neil Kinkopf, a law professor at Georgia State University, who served in the Clinton administration’s Office of Legal Counsel, notes, “People in the White House—Dick Cheney for example; David Addington, his legal adviser—didn’t want the existence of dissent to be known. It’s not hard to imagine David Addington playing very hardball internal politics and not only wanting to prevail over the view of Zelikow but to annihilate it. It would be perfectly consistent with how he operated.”

Zelikow, who ran the 9/11 Commission before joining the State Department, wrote in his original blog post that he believed the administration had failed to erase the evidence of his dissent: “I expect that one or two [copies of the memo] are still at least in the State Department’s archives.” And four top congressional Democrats on Monday wrote Secretary of State Hillary Clinton [PDF] and Adrienne Thomas, the acting national archivist [PDF], requesting surviving copies of the Zelikow memo.

In their letter to Clinton, the Democrats—Reps. John Conyers, Howard Berman, Jerry Nadler, and Bill Delahunt—ask for a search of the archives that Zelikow believes may contain his memo. But the Dems’ letter to the archivist requests more. In that letter, Conyers and the others request the Zelikow memo along with “[c]opies of any ‘documentary materials'” that “mention or refer to” the Zelikow memorandum or “are related to or reflect any effort by an official of the Bush Administration to collect, destroy, or impede the preservation or retention of this memorandum.” In other words, they are looking for evidence of who attempted to bury Zelikow’s opposing view.

This could even have legal implications. Federal law—including the Presidential Records Act—requires that the White House adhere to strict record-keeping standards. If a White House official tried to disappear an inconvenient memo, he or she might have committed a crime. Concerning the Presidential Records Act, the Bush administration never was a stickler. If millions of emails can disappear, what’s one memo?

The Dems want to get Zelikow’s allegations of a cover-up on the record and under oath, and they will. In his email to Mother Jones, Zelikow says that when he testifies next week he plans to “go through a brief chronology of the various arguments for changing the administration position.” But since Zelikow doesn’t appear to know who attempted to smother his memo, congressional Democrats may have to do some legwork—which could include questioning various Bush White House officials—to solve this latest Bush-era mystery.