OVER THE PAST FEW YEARS, improvised explosive devices, the tactic of choice for Iraqi insurgents, have spread to the Afghan roadside in a big way: At last count, IEDs accounted for more than 70 percent of US combat casualties in Iraq and half of those in Afghanistan. Since 2003, according to Pentagon documents, the Army’s Joint IED Defeat Organization (JIEDDO) and its predecessors have spent $14 billion trying to do what JIEDDO’s name implies, including $2.3 billion for high-tech countermeasures “to thwart simple, cheap triggering devices such as two-way radios or garage door openers.”

In Afghanistan, the pricey gear has helped coalition troops find and clear nearly three times as many bombs in 2008 as in 2006. But the insurgents have kept pace: Casualties from IEDs have increased by nearly the same margin. As for whether the money might not be better spent on, say, humanitarian and development efforts, the IED chasers note that US forces will now likely face this guerrilla tactic wherever they go. “IEDs are a weapon,” notes JIEDDO’s 2008 report to Congress. “They are not the enemy.”

How the Military Fights Back 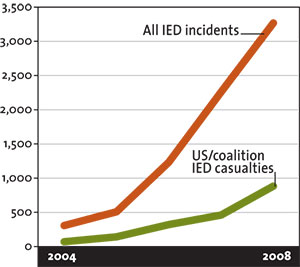 Wedding parties obliterated by US air raids: at least 2