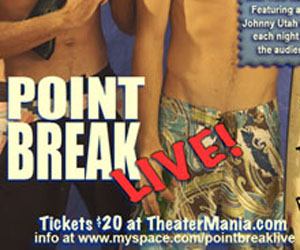 If you’re like me, you think the Patrick Swayze-Keanu Reeves vehicle Point Break is one of the better things to happen to 1991. And if you’re like me, you have a suspicion that the production could somehow be even better were it performed live by young, yelly guys who never, ever put shirts on and a totally unpracticed Johnny Utah lead who is chosen from the audience and reads his lines off cue cards. Well, you’re right on both accounts.

Point Break Live! debuted in Seattle in 2003, but two cities in California are lucky enough to be hosting its current runs. The LA show opened for what was supposed to be a couple of months in 2007 and is still going due to popular demand; San Francisco has brought the show back after a successful go last year. It’s been to New York and Minneapolis and Las Vegas, and according to coproducer Thomas Blake, Nightline is soon to run a segment about how PBL! could change the face of theater. Let’s hope that’s true. Take, for example, this conversation I had with one of the actors after the show:

My friend: Do you guys ever have girls play Johnny?

Actor: Yeah, but it’s kind of a pain in the ass.

Me: Because you guys can’t rub your dicks on her?

Want to see how the climactic parachute scene is recreated on a live stage with about $11 worth of props? Ditto Johnny Utah’s seminal surfing safari? While yourself wearing a poncho, which will be handed to you upon entering, like at a Gallagher performance? The self-consciously low-budget and obnoxious and absurd Point Break Live! is Point Break plus extreme caricaturizing, homoeroticism, and hot bros in board shorts throwing fake blood all over your face. This is the Point Break of your dreams. If you live in California, go. If you don’t live in California, consider flying to California so you can go. In the immortal words of Patrick Swayze’s Bodhi, if you want the ultimate, you’ve got to be willing to pay the ultimate price. It’s not tragic to die doing what you love.