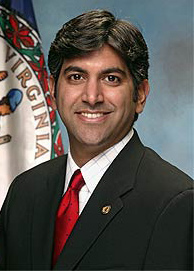 Over the weekend, President Obama announced that Aneesh Chopra, Virginia’s Secretary of Technology, will move to the White House to become America’s Chief Technology Officer. With federal Chief Information Officer Vivek Kundra, Chopra will form Obama’s all-Indian transparency team — among other assignments (like fixing our broadband problem), the two are tasked with using technology to boost citizen oversight of and engagement with their government. (Their parents are probably so proud of their new jobs, but less proud than if they had been doctors.) Here’s Obama on Chopra’s new gig:

In this role, Aneesh will promote technological innovation to help achieve our most urgent priorities – from creating jobs and reducing health care costs to keeping our nation secure.

Aneesh… will work closely with our Chief Information Officer, Vivek Kundra, who is responsible for setting technology policy across the government, and using technology to improve security, ensure transparency, and lower costs. The goal is to give all Americans a voice in their government and ensure that they know exactly how we’re spending their money – and can hold us accountable for the results.

There is a whole community of people who work in the tech/transparency space, and most of them seem to really like Chopra. Here’s Micah Sifry at techPresident:

First, it looks like very good news for the transparency movement, as well as those of us looking for an open-minded leader willing to experiment with new forms of collaborative governance. For example, back in early 2007, under Chopra’s leadership, Virginia was one of the first states to move, with Google’s help, to make its state websites more searchable and thus more accessible to ordinary citizens. The state has also been in the forefront of efforts to create robust web services tracking the giant government stimulus spending package enacted by Obama, and as fed-watcher Christopher Dorobek points out, Chopra is well aware of and supportive of citizen-led watchdog efforts like Jerry Brito’s StimulusWatch.org.

Here’s Nancy Scola, rounding up comment from the big shots:

In comments being emailed around by the Office of Science and Technology Policy, the apparent perch for the new U.S. CTO, venture capitalist extraordinaire John Doerr calls it “an inspired appointment.” Intel’s Craig Barrett praises Chopra as “one of technology’s leading lights.” And Google’s Eric Schmidt calls him “the perfect choice for the Nation’s first CTO.” They seem pleased.

And Tim O’Reilly, who is a legend in the tech space and is credited with coining the phrase “Web 2.0,” has eight reasons why no one should worry about the fact that Chopra doesn’t come out of Silicon Valley (many activists had hoped that an SV giant like Steve Ballmer, Jeff Bezos, Eric Schmidt, or Vint Cerf would get the job). The first two:

1. Chopra has been focused for the past three years on the specific technology challenges of government. Industry experience does little to prepare you for the additional complexities of working within the bounds of government policy, competing constituencies, budgets that often contain legislative mandates, regulations that may no longer be relevant but are still in force, and many other unique constraints. In his three year tenure as Secretary for Technology for the Commonwealth of Virginia, Chopra has demonstrated that he has these skills. In fact, last year, the National Association of State Chief Information Officers ranked Virginia #1 in technology management.

2. The role of the CTO is to provide visionary leadership, to help a company (or in this case, a government) explore the transformative potential of new technology. Try a few of these Virginia technology initiatives on for size:
• the first officially-approved open source textbook in the country, the Physics Flexbook.
• integrating iTunes U with Virginia’s state education assessment framework;
• the Learning Apps Development Challenge, a competition for the best iPhone and iPod Touch applications for middle-school math teaching;
• a Ning-based social network to connect clinicians working in small health care offices in remote locations;
• a state-funded “venture capital fund” to allow government agencies to try out risky but promising new approaches to delivering their services or improving their productivity;
• a lightweight approval and testing process that allows the government to try out new technologies before making a full, expensive commitment.

O’Reilly concludes, “Aneesh Chopra is a rock star. He’s a brilliant, thoughtful change-maker. He knows technology, he knows government, and he knows how to put the two together to solve real problems. We couldn’t do better.” That is about as strong an endorsement as anyone could hope for. Now we just need to find out if Chopra has any game on the basketball court…