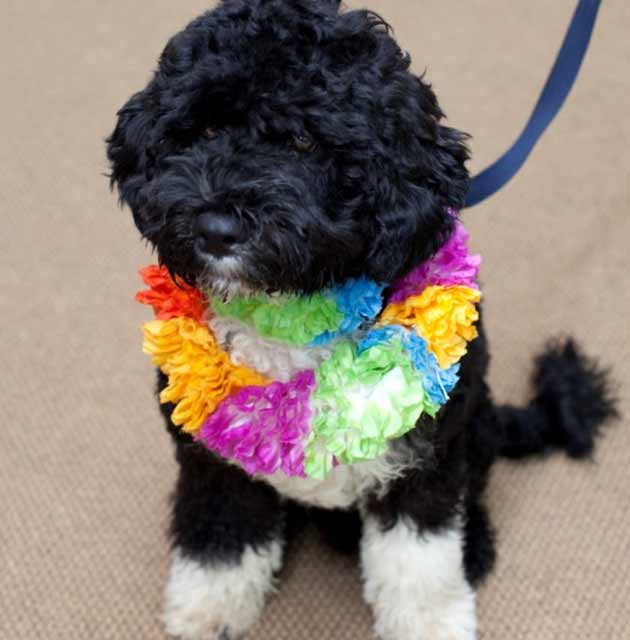 This definitely isn’t “media,” and it’s probably not “culture,” although the little pooch does seem to be wearing a lei, which is, er, kind of cultural, right? Whatever, you know you want to look at pictures of the Obamas’ new pet, which whitehouse.gov has provided, and The Riff can use the traffic. As you already know by now (since the story leaked two days early) the President has finally made good on his campaign promise to get Sasha and Malia a dog. The puppy is a 6-month-old Portuguese water dog, he’s a gift from Senator Edward Kennedy, and his name is Bo. Hmm, “Bo Obama” is a little awkward, but the name is apparently the same as the Obama girls’ cousins’ cat, a phrase I can’t believe I just typed, and is also an oblique reference to Michelle’s father’s nickname, Diddley, which is marginally more interesting I suppose. I have to say, Bo looks like he’s pretty skeptical about this whole deal in the above photo, but I guess I would be too if I was forced to pose for photos in a nothing but a cheap-looking lei. (Again.) One more picture of the first family greeting their new doggy after the jump, and then I’m getting back to posting about indie disco dance tunes. 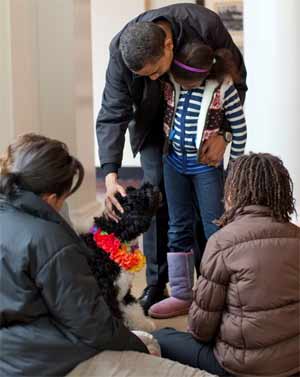