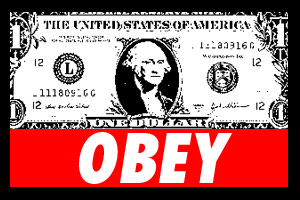 Well, Jeez, you try making money with spray paint and stickers! The New York Times’ Moment blog had design guy Steven Heller take a look at the appropriative work of graphic artist and Obama “Hope” poster creator Shepard Fairey, and despite what the AP says, he believes Fairey isn’t a plagiarist:

Those who rebuff Fairey’s work are angry that he misappropriates (read: steals) famous art and design works; they argue that Warhol changed paradigms while Fairey makes knockoffs. I did an interview with Fairey for his recent book, “Obey: Supply & Demand,” and I admit that on occasion he has come close to crossing the line from acceptable borrowing into murky infringement territory. But after seeing the satiric art barbs that he aimed at politics, cultural icons and bêtes noires in his exhibition at the I.C.A. (where I participated in a panel discussion on appropriation), I can say this: Shepard Fairey is not a crook.

Heller allows that Fairey’s work involves copying “established works,” but maintains the images are “playfully twisted,” and, at its best, a “critique of image ownership.” However, he seems disappointed in Fairey’s more recent turn towards salesmanship, with the “Obey” designs turned into T-shirts and knick-knacks, and Fairey “aggressively using legal means to stop other artists from appropriating his work.” A few years ago, I had an experience with Fairey that made me feel the same way.

As part of my work for San Francisco alternative radio station LIVE 105, I would often do some of our graphic design, including logos and T-shirts for our big winter concert. I don’t remember what year it was, but it was some time after the big “Obey Giant” posters had become ubiquitous around the city. One of my ideas for the concert was a nod to Fairey’s work, with Santa’s face in place of Andre the Giant’s, and the message “Obey Santa” below. I thought it was cute and kind of clever, and so did my bosses at the radio station, but it seemed like the right thing to do would be to contact Fairey himself, show him the artwork, and see if he was cool with it. I tracked down his e-mail address and dropped him a line, and he responded quickly, but to say he was definitely not cool with it. He revealed he was at that point working on turning the Obey designs into a brand, making items for purchase, and that my design (while not actually using a single line from any of his illustrations) might confuse people. My disappointment was twofold; first, my initial attraction to the posters and stickers was partially due to their nose-thumb at advertising, using a graphic and slogan that appeared to be the ultimate distillation of the corporate message (“Obey”/”Buy”) but which itself dissolved into baffling self-referential nothingness on close examination (“Obey what?!“). Turning it into an actual product destroyed all that fascinating ambiguity, turning the viewer into a passive receptacle of a straightforward commercial message (“Buy this T-shirt”). Second, if the whole point of his work was cheeky appropriation, how can you put the kibosh on a cheeky parody, even if it’s part of an admittedly corporate radio station’s promotional campaign? We ultimately went with another design, but still, I was kind of let down.

Again, to Fairey’s credit, he was a nice guy and actually responded, rather than letting me just go ahead and use the design and then suing us, and I understand the difference between art and advertising (I think). Fairey’s work is often eye-grabbing, and he seems to understand intuitively the combination of symmetry and imbalance that gave Soviet propaganda its propulsive vibrancy. Plus, far be it from me to deny someone working in appropriative art forms their financial due. But ultimately, the problem with Fairey’s work is that it doesn’t play by its own rules, and anyone who looks beyond its colorful surface is bound to be disappointed.