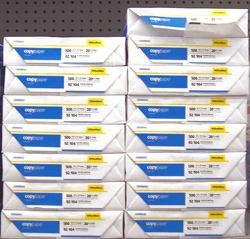 Chris Hayes of the Nation has a nice scoop. Apparently, the paper industry has been bilking the federal government in a massive, massive way. Chris explains:

In 2005 Congress passed, and George W. Bush signed, the $244 billion transportation bill. It included a variety of tax credits for alternative fuels such as ethanol and biomass. But it also included a fifty-cent-a-gallon credit for the use of fuel mixtures that combined “alternative fuel” with a “taxable fuel” such as diesel or gasoline.

Enter the paper industry. Since the 1930s the overwhelming majority of paper mills have employed what’s called the kraft process to produce paper. Here’s how it works. Wood chips are cooked in a chemical solution to separate the cellulose fibers, which are used to make paper, from the other organic material in wood. The remaining liquid, a sludge containing lignin (the structural glue that binds plant cells together), is called black liquor. Because it’s so rich in carbon, black liquor is a good fuel; the kraft process uses the black liquor to produce the heat and energy necessary to transform pulp into paper. It’s a neat, efficient process that’s cost-effective without any government subsidy….

By adding diesel fuel to the black liquor, paper companies produce a mixture that qualifies for the mixed-fuel tax credit, allowing them to burn “black liquor into gold,” as a JPMorgan report put it….

Get that? Paper companies are adding an unnecessary and extremely harmful fossil fuel to their manufacturing processes in order to take advantage of a federal subsidy that was intended to help the environment. Hayes says the 10 largest paper companies will get as much as $8 billion this year from this little racket they are running. Hopefully, with enough attention to this story, the federal government can shut it down.