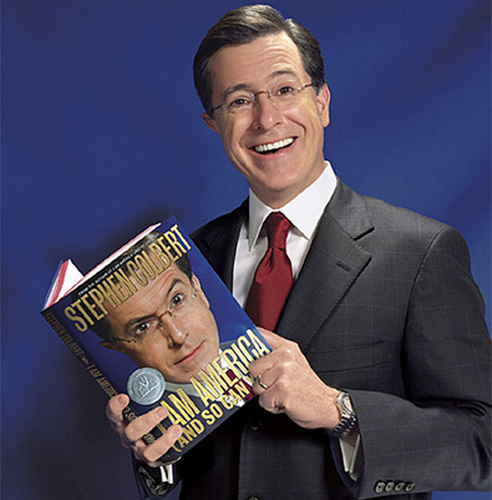 Via HuffPo comes a study that confirms one thing we already knew—Stephen Colbert is totally hilarious—but also points out something surprising: both conservatives and liberals think he’s on their side. According to an Ohio State University study, The Colbert Report is like a political Rorschach text, and you see what you want to see in it:

…Individual-level political ideology significantly predicted perceptions of Colbert’s political ideology. Additionally, there was no significant difference between the groups in thinking Colbert was funny, but conservatives were more likely to report that Colbert only pretends to be joking and genuinely meant what he said while liberals were more likely to report that Colbert used satire and was not serious when offering political statements. Conservatism also significantly predicted perceptions that Colbert disliked liberalism.

Proof that we live in different worlds came just last week when the National Organization for Marriage (nom nom nom!!) thanked Colbert for his parody of their insane “Gathering Storm” anti-gay marriage spot. NOM president Maggie Gallagher actually said “I’ve always thought Colbert was a double-agent, pretending to pretend to be a conservative, to pull one over Hollywood.” Wow. Really? Well, I guess if you think gay marriage is a scary lightning storm, coming to take away your rights, your brain is full of neat ideas.

This whole thing makes my head hurt, but I think that’s the point. In fact, it’s all by design, as Colbert himself pointed out in a 2006 interview with Rolling Stone:

COLBERT: We want people to be in pain and confused. … I come from a fairly conservative place, Charleston, South Carolina, and people have come up to me there and said, “Well, now I like what you do.” They had a little trouble with our liberal, lefty bent over at The Daily Show. But now they’re [in Southern accent] “Good fucking A, man, good for you!” And I’m like, “Well, I’m not sure…”

It’s a sign of how brilliantly the Report succeeds that even its targets cheer it on. (Does anybody else feel like The Daily Show seems flat and dull these days in comparison?) Lest we forget, satire is tough: Soundgarden’s cock-rock parody “Big Dumb Sex” from their 1989 album Louder than Love was so spot-on, the band found they were attracting the very metalheads they were mocking, and frontman Chris Cornell later expressed regret about the track. Let’s hope Colbert can continue to walk the line.