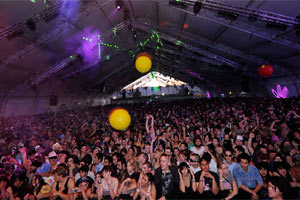 This year, while most of the Coachella headliners are as white as the driven snow (sorry, Robert Smith, but it’s true) there is actually a strong lineup of hip-hop performers around the middle of the bill. So, hip-hop fans, get your butts out of the pool and get over to the venue early. After the jump, check out my selected list of beat purveyors and MCs you might want to try and catch.

The North American/South American (get it?) duo covers the gamut of musical styles, but much of their debut album relies on big-name hip-hop stars like Kanye West, Kool Keith, and Chuck D to give it focus. But who will do the singing live?

The legendary DJ and Stones Throw label honcho is now doing video DJing, so I’m not sure what he’s got up his sleeve for Coachella, but I predict it will be funky.

This quirky New Orleans hip-hop duo jumped on the triple-time fad with their swingy, guitar-led track “Bang Bang.” Supposedly they put on spectacular live shows as well, although their early Sunday slot may keep their tent, you know, comfortably spacious.

The long-lived Minnesota combo has always been known as an “underground” phenomenon, but their most recent album debuted at #5 on the Billboard charts last year and got strong reviews from notoriously skeptical sources like Pitchfork and the New York Times.

Mother Jones readers know him as a Somalia-born rapper who managed to escape his anarchic homeland, but I have to admit that his most recent album Troubador is a mixed bag, with interesting sounds alternating with clichéd balladry. Will the real K’Naan please stand up?

The Virgina-based duo has mostly been notable for their use of edgy, minimalist beats created by their longtime producing partners the Neptunes, but holy crap, how much do I love “What Happened to That Boy” and “Mr. Me Too”? So much.

Clipse & Baby – “What Happened To That Boy”

The Chicago rapper seems on the precipice of either Kanye-style mega-stardom or Arrested Development-style embarrassment, although supposedly his new album is going to be called “Lasers” which can only bode well.

Okay, it’s been nearly 20 years since the legendary band changed the face of hip-hop with their mix of complex, politically aware lyrics and swirling, clattering samples; Flavor Flav is now a reality-show punch line and their new albums are ridiculous. But it seems appropriate that they’re on the same bill as My Bloody Valentine—both bands completely blew my mind at about the same time, changing my ideas about music on a fundamental level. Supposedly they still bring it live, as well, so even though they’re listed next to Groove Armada (?!) I’ll make them a priority.