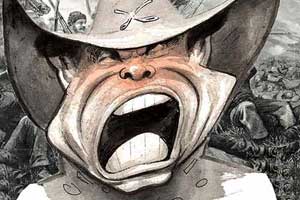 It’s time for Ken Burns to dust off his Steenbeck. Rick Perry has decided to ease Texas into some kind of secessionist revolt. This was bravely put forth on the historic GOP Tea Bagging Day. So in “The Civil War 2.0” Ken can cast Perry as Jeff Davis, struggling mightily to represent his people, trying to maintain their way of life (through their winter of longing for the glory days of Bush) against the tyrannical onslaught of Yankee oppressors (led by Kay Bailey Hutchison as Lincoln). Cannon and rifles are ready and soon explode in a fusillade of tea! The war objective? Hard to tell, but there’s a governor’s race coming up. Here’s the latest poll:

U.S. Sen. Kay Bailey Hutchison, who has said she plans to run for governor in 2010, leads Perry 56 percent to 31 percent among likely Republican voters, according to a poll released Tuesday by Raleigh, N.C.-based Public Policy Polling.

Let the Muzak strike up Dixie and let us rally round the mall in our gray tracksuits.

Jeff Davis: “The North was mad and blind, would not let us govern ourselves, and so the war came.”

Kay: “With malice toward none and charity, well whatever.”