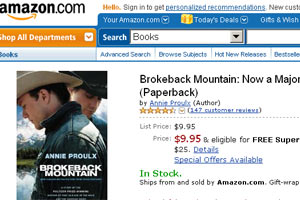 We weren’t quite fast enough here on the Riff to get on this story when it first broke, but it was all over the Twitter. Shoppers (and authors) had started noticing that gay- and lesbian-themed books were getting stuck on the virtual bottom shelf at Amazon.com recently, with titles from Giovanni’s Room to Brokeback Mountain getting slapped with an “adult” label. This apparently made them harder to find in searches and stripped them of their all-important Amazon sales rankings. Well, as queers are well aware, having any mention of our existence deemed Not Safe For Kids is one of the most troubling aspects of homophobia, so this understandably ticked a lot of people off. But Amazon’s explanation is calming things down a bit, and proves the maxim, “When in doubt, blame France”:

Amazon managers found that an employee who happened to work in France had filled out a field incorrectly and more than 50,000 items got flipped over to be flagged as “adult,” the source said. (Technically, the flag for adult content was flipped from ‘false’ to ‘true.’)

Mais pourquoi?!! Now, one of course wishes to give the online retailer and its clearly drunk French employees the benefit of the doubt, and it turns out many other not-exactly-adult titles were stuck in the back room, including, as Amazon put it, titles in “Mind & Body, Reproductive & Sexual Medicine, and Erotica.” But, uh, Erotica seems like it might actually deserve to be called “adult,” doesn’t it? And it still doesn’t answer why so many queer-themed titles got called naughty, and not, say, American Psycho (which, as the New York Times pointed out, had no problem keeping its sales rank). All I know is, Amazon better get this figured out quick, because they do not want to lose my Christmas present business. I have seven nieces and nephews!