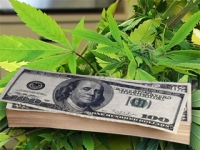 The debate about whether to legalize marijuana in the United States has never been a mainstream one. So it’s been fascinating to watch how much attention the concept has gotten lately, however viable it may or may not be.

Preoccupation with the violent drug war is one factor; marijuana is the largest source of revenue for the Mexican cartels’ multibillion dollar business north of the border. Commodify the major cash crop through legalization, the idea goes, and its cost will plummet, putting a serious dent in the bad guys’ bank accounts.

But the larger issue lighting up the idea seems to be the battered American economy.

In February, California state lawmaker Tom Ammiano proposed legislation that would regulate the cultivation and sale of marijuana, with a potential tax windfall of more than $1 billion to help bail out the state from a severe budget crisis.

On Thursday, the legalization concept wafted all the way up to the presidential level. In a live Internet “video chat” with Americans, President Obama found himself responding to a question that had been voted among the most popular of those submitted by the public: whether the controlled sale and taxation of marijuana could help stimulate the US economy. “I don’t know what this says about the online audience,” Obama quipped. “The answer is no, I don’t think that is a good strategy to grow the economy.” By Thursday night, CNN’s Anderson Cooper was jabbering at length about the idea with law enforcement officials.

The issue of taxation just cropped up in another intriguing way. The Drug Enforcement Administration caused a stir in San Francisco on Wednesday when it raided a locally permitted medical marijuana dispensary. In part there was outcry because just days prior US Attorney General Eric Holder had announced that the feds would no longer prosecute medical marijuana dispensaries where they are allowed under state and local law. So why the bust now?

So far the DEA isn’t sharing any details, but according to the San Francisco Chronicle, “A source in San Francisco city government who was informed about the raid said the DEA’s action appeared to be prompted by alleged financial improprieties related to the payment of sales taxes.”

It’s difficult to gauge the Chronicle’s anonymous source, but if accurate, the explanation seems rather odd. Last I checked, there was no national sales tax in the United States, so why would the federal government be interested in that issue? Moreover, while I’m not sure whether it applies to medical marijuana, prescription drugs are exempt under the current California sales tax regime.

The federal government does oversee interstate commerce, and US border security, of course—perhaps better clues to the DEA’s continuing interest in the case. (Was supply at the SF pot club the real issue?) Which takes us back to the headline-grabbing drug war. You don’t have to stare for long at this DOJ threat assessment map tracking the Mexican cartels to notice the densely covered trajectory that runs the length of I-5, from San Diego to San Francisco to Seattle.