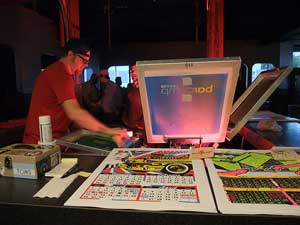 Sheerly Avni is a film and culture writer guest-blogging for Mother Jones from Austin’s South by Southwest Festival.

Part One: Email Is for Old People

In a fit of pathological optimism, I opted to register for both the Interactive and Film portions of SXSW. This is like deciding to “do” both Italy and France on a five-day trip to Europe: Vertigo-inducing and ill-advised, though possible if you forgo sleep. Forgoing sleep in Austin has been easy; my hotel walls, more than three blocks away from the musical epicenter, were booming in time to the bass beat until well past 2 a.m.

And now I also have insomnia. Because not until I started passing out my spiffy new business cards in the SXSW pressroom did I discover that, despite living in San Francisco, having an iPhone, knowing some html, and maintaining a regular Facebook account, what a pathetically ass-backwards, last century, late-adopting, buzzword-clueless Internet rube I really am.

SXSW is all about the search for the new. New music, new filmmakers, and in tech, that new “killer app,” which will change everyone’s lives forever. The killer app of two years ago at SXSW was Twitter. The killer app of last year was also…. Twitter. And this year at SXSW, as I discovered while trading business cards with tech bloggers and entrepeneurs too polite to point it out (thanks, Grant!), not having a Twitter account printed on my card places me firmly on the dusty, musty side of ever-narrowing bandwidth between tomorrow and yesterday.

Email addresses are obsolete; give your Twitter handle instead? It took me a while to wrap my mind around the concept—long enough that by the time I’d built my new account, I’d found out that guess what, Twitter’s out now, too.

In my next dispatch: Two films which premiered this weekend about what happens when it’s not your email address but your livelihood that’s become obsolete.