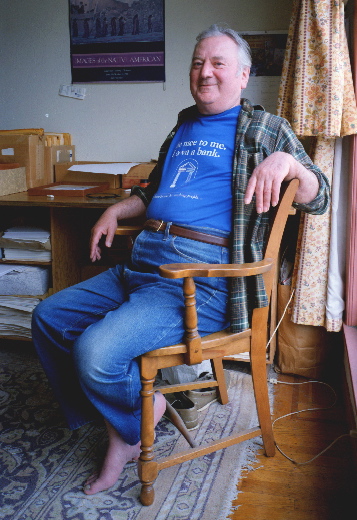 Over the weekend, Archie Green, grandfather of labor history, passed away in his San Francisco home at the age of 91. Over at Daily Yonder, Julie Ardery has written Green a great eulogy chronicling his many and varied accomplishments:

Archie, as he was universally known, was a scholar of what he called “laborlore” – the expressive culture of working people. For five decades he studied hillbilly music and pile-drivers’ tales. He made inventories of  “tin men” – the showpieces of sheet metal workers — and analyzed sailors’ slang.  He recorded songs by millworkers and miners’ wives. Working on until just months before his death, he wrote countless articles, both academic and popular, and five books,
including Only a Miner, his landmark study of coal-mining music.

Born in Winnipeg to Russian Jewish parents in 1917, Green spent most of his childhood in LA. He attended UCLA and UC Berkeley for college, and spent the first part of his adult life building ships on the waterfront. But in 1959, he went back to school, and over the next few years earned degrees in both library science and folklore. He spent the better part of the ’60s and ’70s digging up and dusting off forgotten bits of what he called “laborlore”—legends, folksongs, and stories of individual workers. In 1976, he convinced Congress to pass the American Folklife Preservation Act and create the American Folklife Center at the Library of Congress. In recent years, he worked with the San Francisco based Fund for Labor Culture and History and helped organize  Laborlore Conversations, a series of conferences on workers’ culture past and present that drew a crowd of historians, activists, union members, and many others.

Mother Jones is especially indebted to Green, since without him, our namesake, Mary “Mother Jones” Harris might have been forgotten—he recovered her legacy in 1960. Check out the folksong “The Death of Mother Jones” here. Sure wish I could hear it. If anyone knows where an MP3 lives, do tell.