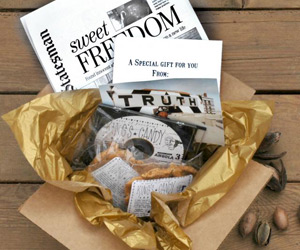 It began with a few purloined pats of butter, cartons of milk, and sugar packets from the mess hall. With a little ingenuity and a lot of time on his hands, Robert King began making praline candies inside Angola prison more than a quarter century ago. Today, eight years after he walked out of prison, his small candy enterprise makes enough money to pay some of his living expenses in Austin, Texas.

King was raised by a grandmother whom he remembers as a gifted cook. Growing up, he dreamed of opening his own restaurant. But by the time he reached his teens, the culture of violence—fueled by poverty and racism in the New Orleans neighborhood known as Algiers—had claimed him.

In the 1960s, when King was living in an Angola dormitory and working on the field crews chopping sugarcane for two pennies an hour, he watched inmates in the prison cafeteria turn the fruits of his labor into candy. Under the tutelage of a fellow inmate known as “Cap Pistol,” he was eventually apprenticed into the fine Southern art of making pralines.

In 1972, King was assigned to solitary confinement (for allegedly plotting to kill a guard—a murder that occurred before he arrived at Angola), where he would ultimately spend 29 years. Ensconced 23 hours a day in a 6-by-9-foot cell, King kept himself busy reading, writing, studying law—and experimenting with pralines.

He fashioned a cook pot out of segments of soda cans stacked together like a chimney. For fuel, he wrapped lengths of toilet paper into tight rings, tucked the ends in on themselves, and lit them under his makeshift stove. All of this took place on the edge of his toilet; he could easily knock the whole contraption into the bowl to avoid being busted for contraband. For the most part, the guards looked the other way.

The ingredients came courtesy of fellow inmates saving their butter and sugar, and occasionally a guard willing to smuggle a sack of sugar to King in exchange for a stack of the maple-y lumps. King says fellow inmates brought him pecans from the Angola grounds. He had many years to perfect his technique. It was crucial to get the tissue burning hot enough and long enough to caramelize the sugar, but not so hot that it would burn. The weather mattered, too; on an especially humid day the candy might not set properly.

For a cooling tray, King used the manila envelopes he was permitted to have for legal mail. Turned up along the edges, they worked well enough to contain the thick concoction while it hardened. When he was finished, he would slip the morsels to his fellow inmates in the hour he was allowed on the tier to walk each day. More often, inmates reached out their hands as they passed his cell for a taste of a New Orleans most would never see again.

When King was released in 2001, after a judge overturned his conviction, his aunt took him to her home and instructed him to whip up a batch of his pralines on the spot. He has rarely gone a week since then without stirring up a batch; in 2001 he began selling the candy under the name Freelines and handing them out at events where he spoke about his two friends—Albert Woodfox and Herman Wallace—who remain in solitary at Angola.

In 2005, when Hurricane Katrina struck, King stayed in his midtown house waiting for his candy to cool. He was eventually forced onto his roof and handed out pralines to passing rescue personnel. (They wouldn’t pick him up because he insisted on taking his dog.) Eventually, friends from Texas reached him by boat.

King’s candy, along with his prison memoir, At the Bottom of the Heap, earned him a degree of celebrity. In 2005, National Public Radio’s Kitchen Sisters profiled him for their “Hidden Kitchens” series, and the following year oil heiress and philanthropist Ann Getty invited King to use her restaurant-quality kitchen in San Francisco to make enough Freelines to start volume sales. A portion of the business proceeds now go to the campaign to free Woodfox and Wallace.

When King visited Angola last year accompanied by Congressman John Conyers, he gave Warden Burl Cain a package of Freelines. In an October deposition, Burl Cain took the candy as evidence that Albert Woodfox had not “reformed” his political views. “[T]here’s been no rehabilitation. And even when Robert King Wilkerson came with Congressman Conyers to Angola, he handed me out pralines. They gave me a little pack of pralines, Congressman Conyers did, and on that pack of pralines was a Black Panther.”