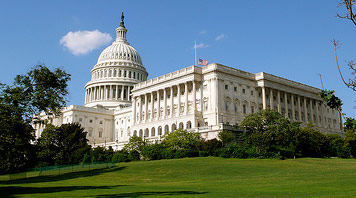 On the first day, Henry Waxman created a draft. And the enviros said it was good.

Rep. Waxman (D-Calif.), chairman of the House Energy and Commerce Committee, has promised to deliver comprehensive climate change legislation to President Obama within the year. On Tuesday, the California congressman, along with Rep. Edward Markey, released a “discussion draft” of what is currently being called the American Clean Energy and Security Act of 2009. It’s a piece of legislation that could dramatically reshape the country’s energy economy.

The 648-page draft legislation, which addresses virtually every aspect of the fight against global warming, was quickly embraced by green groups.

The bill would require “retail electricity suppliers” (that is, utility companies) to get 25 percent of their electricity from renewable sources by 2025. It seeks stronger fuel standards for cars, paves the way for the development of a smart electricity grid, and provides financial incentives to retailers who sell high volumes of energy-efficient appliances. It creates grants for universities and colleges to develop curricula that will train a generation of professionals ready to work in renewable energy and climate change mitigation. And it instructs the labor secretary to create training programs that help workers from dying industries transition into ones bolstered by the bill.

The legislation creates a National Climate Service at the National Oceanic and Atmospheric Administration (NOAA) that will lead climate change research in the future, and directs every federal agency to review the impact of climate change on matters within their jurisdictions. The draft bill requires the secretary of the Department of Health and Human Services to create a national strategy for dealing with the public health effects of climate change, and creates an international program within the US Agency for International Development (USAID) to provide assistance to developing countries most vulnerable to the negative effects of global warming.

A central and controversial part of the bill is its cap-and-trade program. Under it, electric utilities, oil companies, and large industrial manufacturers, which produce roughly 85 percent of the nation’s global warming emissions, will have to secure federal permits for their pollution. The pollution limits in those permits will be lowered every year until, in 2050, they are 83 percent below 2005 levels. The bill does not specify whether permits will be sold or given to corporations for free. It also does not say what the resulting revenue will be used for if the permits are in fact sold. (The Obama administration, for its part, had planned on selling the permits and using the revenues to fund renewable energy research, among other climate change imperatives.)

Initial reviews of the draft legislation by environmental groups have been positive. “The Waxman-Markey draft bill is a strong start and is a testament to their decades of leadership on clean energy and other environmental issues,” said Carl Pope, the executive director of the Sierra Club, in a statement. “This bill combines the right mix of policies and the long-term vision necessary to build the green economy that will pull us out of the current economic crisis.”

Lance Pierce, who directs the Union of Concerned Scientists’ climate program, called the draft “a truly comprehensive outline.” He added, “This broad approach is the best way to promote renewable energy sources, curb our oil dependence, and avoid the most expensive consequences of climate change.” An analysis by Pierce’s group indicates that a renewable electricity standard similar to the one in the bill would create 297,000 new domestic jobs and save consumers $64.3 billion in lower electricity and natural gas bills by 2025.

The Environmental Defense Fund, Environment America, and the League of Conservation Voters all put out statements saying they “applaud” the draft bill.

Even the polluters got on board. The United States Climate Action Partnership—a group that represents Ford, GM, Chrysler, Alcoa, BP, PG&E, Shell, and other industry giants—said in a statement that it “hails the discussion draft” as “a strong starting point.” Two reasons why some of the nation’s biggest polluters might be on board: a virtually unlimited amount of pollution offsets, which will essentially allow corporations to buy their way past the cap-and-trade system’s pollution limits, and federal promotion of research into “clean coal.”

An offset means that a corporation or other entity that produces emissions in excess of the federally mandated cap can purchase pollution credits from firms that came in under the limit. “Under the cap, there are 2 billion tons of offsets allowed,” said Steven Biel, who heads Greenpeace’s global warming campaign. “That is a big fat loophole waiting to be exploited. The total emissions reductions required under the cap 20 years from now are still less than 2 billion tons.”

Biel suggested that Greenpeace will seek to modify the offset provision as the bill moves forward. He wants zero offsets. “The whole idea behind an offset is to say, ‘In order protect trees in Brazil, we need to trade those trees for smokestacks in Ohio.’ Our position, and I think the position of anyone who is not looking at this from the perspective of a coal company, is that we need to move forward as aggressively as possible to transition America to a clean energy economy and protect those forests at the same time.”

The federal support for coal capture and sequestration—a technology of debatable plausibility that, if successful, would enable coal plants to operate with low emissions—will likely be popular in coal-producing areas (and with lawmakers that represent those locales). However, it has environmental groups wary. “This is a straight surcharge fee for every American on your electric bill to pay for this unproven, hypothetical technology that has never been shown to work,” said Biel. “That money could be used for smarter renewable energy technologies.”

Despite his reservations, Biel echoes the enthusiasm of the rest of his colleagues in the environmental community when speaking of the bill overall. “There are a lot of really strong elements here to build on. The draft bill is a good first step.”