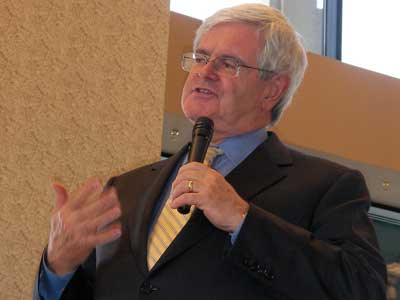 Newt Gingrich just spoke here at CPAC. If there is anyone who embodies CPAC’s hardline, outsider’s identity (much time here is spent bashing the congressional GOP for being too willing to compromise), it’s Newt. No wonder, then, that Newt entered a packed ballroom State of the Union-style, walking through the back doors and shaking hundreds of grasping hands as he moved up the aisles toward the stage, all while Eye of the Tiger pounded through the speaker system.

As David Corn discussed in a recent magazine article for Mother Jones, Newt is back in a big way. As conservatives try to figure out which national figure is best fit to lead them back to power, they are increasingly turning to a guy who had no role in the failures of the last eight years and was responsible (as he is ready to remind you) for the party’s last major success, the 1994 takeover of Congress.

But I’ve had trouble understanding Newt’s appeal. His ideas and theories are sometimes bizarre. (“There is a gay and secular fascism in this country that wants to impose its will on the rest of us,” he told Bill O’Reilly.) When he does find an idea that sounds serious, it often doesn’t hold up to scrutiny. He argued today, for example, that jobs would flourish and “virtually every American with savings would immediately be better off” if the capital gains tax was reduced to zero. Anyone with a working muscle in their head knows that such a plan, if enacted, would primarily benefit the wealthy investor class. It would essentially be a payday for people who make substantial amounts of money through their investments. That’s the rich, not everyday Americans. And there are about a million better ways to create workaday jobs than giving a massive tax cut to the rich.And think about that for a second. Newt likes to tout his proposals as “new” and “bold.” He positions himself as the GOP’s top idea man. And yet, what’s new about a tax cut for the rich? It’s the same topline economic idea the GOP has been pushing for two decades.

I think Newt is so widely beloved here because of something else: his presentation. He is the snarkiest kid in the classroom. His taunts of Democrats and the media sound intelligent and are often genuinely funny. His flair, his sarcasm, his ability to make his listeners feel like they are smarter than not just those idiot libs but every dolt in Congress – they simply cannot be matched by any other public face in the GOP today. Newt’s often inflammatory, as well. He never shies from a declaration that is obviously too grand for the moment.

These tendencies were on display today. Jibes included: New York Times seeks the resurrection of the Soviet Union. Chris Dodd and Barney Frank would flop pathetically if they tried to run their own businesses. Tim Geithner couldn’t figure out how to pay his taxes. “Jimmy Carter was utterly, totally confused…. This guy was just not there.”

Overstatements included: Obama’s first month is the “boldest attempt to create a European socialist model I have seen.” The upcoming elections are the “most consequential in American history.” Card check, a labor law soon to be before Congress that would make it easier to organize a union, is “the greatest threat to the freedom in the workplace in American history” and “a mortal threat to American freedom.” Hamas, Iran, and North Korea pose a threat to the very existence of western civilization. “Ronald Reagan defeated the Soviet Union in 10 years.”

Newt argued here at CPAC that there is a people’s party, which rests on conservative principles and saw its zenith during the 1994 Republican Revolution, which, coincidentally, he led. Opposing the people’s party is an elites’ party, which includes Barack Obama and the Democrats, George Bush, and any Republican in Congress that Newt and the attendees of CPAC don’t like. The idea that our economic policy over the last 18 months have been part of a “Bush-Obama” recovery plan is something of a stretch, but the CPACers here today ate it up. Who cares if it makes sense? If you oppose Obama and you view Bush as an apostate, as many conservatives now do, there’s a man out there for you. His name is Newt, and he is ready to lead.