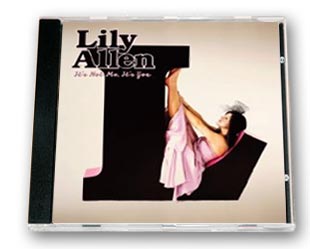 British singer-songwriter Lily Allen’s second album, It’s Not Me, It’s You, isn’t out ’til next week, but you can listen to the whole thing at her MySpace page, and I recommend you do: it’s a charming, affecting album with a subtly edgy electro-pop style.

Allen is just 23 years old, and both her life and her creative output straddle adult wisdom and childlike innocence in a peculiarly 21st-century way. Back in 2005, she was one of the first artists to ride MySpace to mainstream fame, posting demos to her page which quickly ranked up huge numbers of listens. Rock critics looked down their noses at this chirpy pop starlet going about stardom the wrong way, but she slayed them easily with the release of her debut album, Alright, Still, a remarkably astute revivification of the British ska and reggae style of the English Beat era, combined with clever, contemporary lyrics.

Unfortunately, over the last two years, it’s seemed like Allen’s tabloid fame began to eclipse her talent. Drug and alcohol problems surfaced, and then, most tragically, the singer suffered a miscarriage in early 2008, splitting with the father, Chemical Brother Ed Simons, soon afterwards. After suffering through so much turmoil, it’s easy to understand why Allen might turn in a completely different musical direction, and indeed, she seems to have abandoned those loping Jamaican rhythms entirely.

It’s You has been given a sparkling electro sheen by producer Greg Kurstin of The Bird and the Bee, and rockist snobs might turn up their noses again. But Allen has outwitted them once more. The album is richly satisfying, both for her quirky wit and its surprising musical depth. Lead single “The Fear” uses plaintive guitar strumming and a jaunty beat to draw you in, and then walks a lyrical tightrope, with Allen first intoning sarcastic pronouncements about the road to fame, and then blindsiding you with real emotion: “When do you think it will all become clear? / Cause I’m being taken over by the fear.”

Other tracks push musical boundaries as well: opener “Everyone’s At It” seems at first listen like a piece of teen-pop candy, but strange noises buzz and swirl around the beat, and the chorus swells with emotion while avoiding the standard Top 40 clichés. Later, on “Not Fair,” it’s heartening to see Allen is as playful as ever, detailing a lover’s sexual failings over a countrified jaunt, but she once again brings true feeling out of the jokes, repeating “It’s really not okay” in the chorus.

Ultimately, despite its playfulness, It’s Not Me, It’s You is a more “adult” album, avoiding the easily singable hooks of her early hits like “Smile.” But with “The Fear” currently lodged at #1 in the UK singles charts, it appears that she may have another hit on her hands anyway.