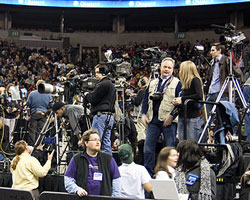 The presidential campaign of 2008 seems pretty far off these days. An economic collapse will do that. But given the profound challenges facing the nation and the president these days, it’s worth reviewing the media coverage of the race to see if journalists last year effectively probed the candidates vying to lead the country through a difficult period. Sadly, there were far more media lowlights than highlights during the campaign, as too many reporters and pundits focused on flag pins, bowling, and fairly trivial faux pas.

One could do a full article just on William Kristol’s errors and flubs at the New York Times (my favorite coming when Kristol touted Clarence Thomas for vice president long before he fell in love with Sarah Palin). Moreover, it often seemed that America was trapped in an alternative universe shaped by the media, with John McCain running against some scary, inexperienced, part-Muslim who was palling around with Weathermen radicals and terrorists. Then the votes were counted, and the boogeyman was gone. Today, even half the people who voted for McCain say they are optimistic about Barack Obama’s presidency. So much of the media’s performance ended up not mattering—or being trumped by other factors.

Going back only to last April, here are some defining media moments of the 2008 campaign

On April 18, in perhaps the most embarrassing performance by the media in a major presidential debate in years, ABC News hosts Charles Gibson and George Stephanopolous focused mainly on small stuff when Hillary Clinton and Barack Obama faced off in Philadelphia. Wars in Iraq and Afghanistan, the health care and mortgage crises, the state of the economy, and other pressing issues had to wait until the midway point. Before then, Obama was pressed to explain (once again) his relationship with the Rev. Jeremiah Wright and his reason for not wearing a flag pin, while Clinton had to answer for her Bosnia trip exaggerations. Obama was also forced during this debate to defend his slim association with former 1960s radical Bill Ayers. This led to Obama’s claim that Hillary’s husband pardoned two other radicals. And so on. Gibson only got excited when he complained about anyone daring to raise taxes on his capital gains.

Remember “Bowling-gate”? While campaigning in Pennsylvania, Barack Obama threw a few gutter balls attempting to bowl. Suddenly many in the media were depicting him as a wimp and out of step with America, even though his skills at playing a far more popular sport (basketball) suggested he was actually the best athlete to run in years. Joe Scarborough at MSNBC opined that Americans want a real macho man in the White House and that Obama was “prissy.” Maureen Dowd actually referred to it as Obama’s “bowling debacle.” Elizabeth Edwards, with so much else on her plate, was driven to write an op-ed for the Times titled “Bowling 1, Health Care 0.” In a column, I dubbed it “the return of gutter politics.” Does anyone now care about Obama’s misadventure in bowling?

In May, liberal bloggers and commenters at The Washington Post‘s website rightly criticized a column by syndicated scribe Kathleen Parker that questioned whether Obama “gets America” and if his “DNA” was “full-blooded” enough. But she was only following the footsteps of Peggy Noonan of the Wall Street Journal who raised similar issues three weeks earlier—and was praised by NBC’s Brian Williams for a “Pulitzer”-worthy effort. Noonan had written, “Hillary Clinton is not Barack Obama’s problem. America is Mr. Obama’s problem…[H]as he ever gotten misty-eyed over… the Wright Brothers and what kind of country allowed them to go off on their own and change everything? How about D-Day, or George Washington, or Henry Ford?”

Henry Ford, by the way, was a vicious anti-Semite, but no matter. Noonan continued: “John McCain carries it in his bones. Mr. McCain learned it in school, in the Naval Academy, and, literally, at grandpa’s knee…Mr. Obama? What does he think about all that history? Which is another way of saying: What does he think of America? That’s why people talk about the flag pin absent from the lapel…But what about Obama and America? Who would have taught him to love it…[N]o one is questioning his patriotism, they’re questioning its content, its fullness.” No one? Surely not Peggy Noonan.

At the end of May, appearing on Fox News on Sunday, Liz Trotta, a former editor with the Washington Times and broadcast TV journalist, was asked by the host, Eric Shawn, about the latest Clinton controversy—Hillary’s remark that people demanding she leave the race ought to remember that Bobby Kennedy was assassinated in June of 1968—that is, late in the campaign. Trotta replied, “And now we have what some are reading as a suggestion that somebody knock off Osama, uh Obama. Well, both, if we could.” She laughed. The host, Shawn, commented: “Talk about how you really feel!” Trotta offered a weak apology the next day. All was forgiven.

Perhaps the media did, as some have charged, unintentionally help elect Obama—indirectly. At the Democratic convention in Denver, many reporters provided overblown coverage of the supposed threat of female Hillary delegates and supporters to bolt the Democratic Party and back McCain. The leaders of this effort received much face time on TV, and political reporters and pundits claimed that this group was merely the tip of the iceberg and that many women, particularly older ones and suburban/blue-collar types who had voted for Hillary in the primaries could abandon the Democrats in November.

There was no firm evidence for this, and few commentators on TV and in print seemed to notice that the same few disgruntled Hillary delegates appeared on all of the shows. Still, Obama’s possible defeat because of the possible defections was widely predicted.

John McCain and his people, though, bought this analysis. And Sarah Palin rose to the top of their VP list. They saw an opening—which really wasn’t there—and went completely overboard. Not only did a woman VP suddenly look like a great idea, but a folksy one would have extra appeal to the Hillary primary voters so hyped by the media. Writing in the New York Times, Kate Zernike noted that Democratic women could well flock toward Palin: “Palin’s selection unleashes gender as a live issue again, just when Democrats thought they had it under control.”

But this mass defection would never happen. Instead, preposterous media coverage of the unhappy Hillaryites apparently had caused McCain to select as his running mate someone who would eventually lessen his chances of victory.

Nothing was more embarrassing for the TV and cable pundits during the fall campaign than the fact that their scoring of the three presidential debates and the single VP debate were regularly undermined by the verdicts of focus groups and instant (scientific) polls. Time and again, most pundits scored a debate even or nearly so, only to discover that in each case the Democrat was overwhelmingly pronounced the victor by voters who watched.

Following the conclusion of each of the four debates, the McCain-Palin “bounce” would last barely 30 minutes—until the focus group/poll results came in. Give the major media outfits credit for this corrective innovation. Without such polls and focus groups, McCain would have been awarded the “Big Mo” or at least the “Slow Mo” by out-of-touch pundits.

During the debate between Sarah Palin and Joe Biden, many commentators lowered the bar for the Alaska governor. David Brooks blurted out at a panel discussion in New York City that Palin was unqualified for her post. He would not say so, though, in his column. Rich Lowry of The National Review admitted on the magazine’s website that he “sat up a little straighter” on his sofa, aroused by Palin’s smile and wink—and claimed that he saw “starbursts.” Other pundits jumped on Joe Biden for referring to people in Bosnia as “Bosniaks.” Turned out he was correct. And at the first Obama/McCain debate, Tom Brokaw noted that he had received tens of thousands of questions donated by voters—and then he asked the candidates some of the most obvious ones of the entire campaign.

In the final days of the campaign, there were too many media infractions to count or cover: from the sensational coverage of the young woman who supported McCain who was supposedly mugged and “branded” by an Obama backer (a hoax) to the revival of the William Ayers issue. But one moment was memorable.

William Kristol appeared once again on The Daily Show, where host Jon Stewart periodically would ask (rhetorically), “Oh, Bill Kristol, aren’t you ever right?” This night, Kristol, in character, predicted a McCain win. When Stewart acted doubtful, Kristol dismissed Stewart for depending on conventional media sources: “You’re reading the New York Times too much.” Stewart replied, “Bill, you work for the New York Times!” Later, Stewart got Kristol to say that Obama was not a radical and would probably be a “conventional president” likely to disappoint the left. Stewart then asked, why are you and McCain calling him a dangerous radical if you don’t mean it?

It was a question that could have been asked of many others in the media.