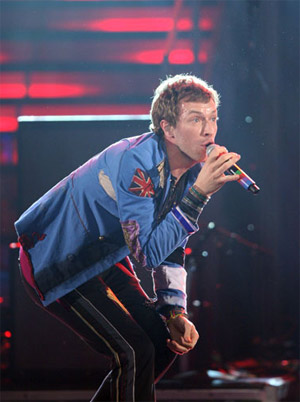 Oh, the many ironies of life on the West Coast: we’re mocked as hippies even though we all have cars, people imagine us frolicking on the beach when it’s actually 45 degrees and raining, and awards ceremonies, even though they’re taking place in our time zone, are tape-delayed three hours for us, so we can finish our dinners. This does mean that we can look on the interwebs and see the winners before they even start, though, which is nice. Of course, it turns out that my predictions were pretty much wrong: I apparently had a brief moment of naïve optimism that the Grammys would suddenly start honoring what are truly the best songs of the year, and not whatever artist has the greatest name recognition amongst a bunch of 60-year-olds. Silly me. While I held out 50% of my hope that M.I.A. might pull out an upset in the record of the year category, Robert Plant and Alison Krauss won for “Please Read the Letter.” Live-blogging the ceremony, the New York Times‘ Jon Caramanica had an amusing observation: perhaps, in 30 years, Animal Collective might arouse the same nostalgic feelings that Led Zeppelin do now, but somehow I doubt it. Krauss and Plant also picked up album of the year, over my pick of Radiohead—I guess my thinking was that Grammy voters would acknowledge both In Rainbows‘ sheer musical triumph and its status as an industry-changing event, but nope, they did not.While I couldn’t bring myself to make a prediction for song of the year, seeing as all the nominees were terrible-to-middling, Coldplay rode a wave of anti-lawsuit sympathy to win for “Viva La Vida.” The insufferable spangled Brits also won album of the year, although they at least acknowledged that their silly, shaggy pseudo-militaristic outfits were just a cheap imitation of Sgt. Peppers. But hey, good news: Daft Punk’s “Harder Better Faster Stronger” won for best dance recording (eight years after its initial release, naturally), and the record of their phenomenal concert tour, Alive 2007, won for best electronic/dance album. Radiohead at least pulled out a win for best alternative album. Weirdly, French techno duo Justice’s awkward redo of MGMT’s “Electric Feel” won for best remix; the category was notable for the presence of Toronto trance superstar Deadmau5’s hypnotic remix of Morgan Page’s “The Longest Road,” the first time a track on an independent label has ever been nominated.

As I write this, the actual telecast has just started for us soggy, pseudo-environmentalist West Coasters, but thanks to the aforementioned interwebs, we know that we can switch over to The Simpsons until T.I., Kanye, Lil Wayne and M.I.A. take the stage in about 90 minutes for “Swagga Like Us,” which the Times’ live-bloggers called a “legendary” performance. I like that song.