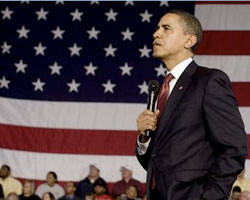 On Monday night, at his first presidential press conference, Barack Obama repeatedly referred to his trip earlier in the day to Elkhart, Indiana, the RV-making capital of the country, where unemployment has more than tripled from 4.7 percent to 15.3 percent in the past year. It was as if–after weeks of being bogged down in Washington sausage-making–he was saying, “Hey, there is a real world out there.” By leaving town, if only for a few hours, he had attempted to position himself as the voice of the hurting common American. The point: to highlight the problem in poignant details so that the solution he is pushing–the stimulus bill–receives a little more political lift. The bill had received a boost shortly before he appeared before the White House press corps, when the Senate voted to clear the way for its version to be approved on Tuesday. But the House and the Senate versions still have to be reconciled and the final version approved by both chambers. Which means that Obama still needs to exert political muscle.

At the press conference, Obama stuck to his message with discipline and eloquence. He contended over and over that the stimulus bill, while not perfect, needed to pass immediately. Otherwise, a worsening situation could worsen more quickly. Doing nothing, he noted, would “create a negative spiral.” Think of Japan in the 1990s, he added. His basic argument was, don’t get lost in the weeds of the stimulus bill, when there’s a fire in the forest. It’s an argument he presents with confidence and justification. He has a knack for conveying the gravity of the situation without appearing gloomy. At one point, he declared, “The party now is over.” Has any president ever said those words?

The problems may be challenging; the questions were not. Nothing tripped up Obama. ABC News’ Jake Tapper asked him how he would measure the success or failure of his stimulus plan. Obama had an easy reply: whether or not it creates or saves 4 million jobs. Obama suggested that no one should look for clear, positive results until next year. “This year is going to be a difficult year,” he added. Obama made little news. Veteran journalist Helen Thomas tried to force him to acknowledge that Israel has nuclear weapons. He sidestepped the matter. CNN’s Ed Henry asked if he would reverse the Bush administration policy of forbidding the media from covering the repatriation of coffins containing the remains of dead American soldiers. Obama answered that the policy was under review. A lot, it turned out, is under review, including US policies toward Iran and Afghanistan. But Obama did signal a possible policy shift when he said of Afghanistan, “The national government seems very detached from what’s going on in the surrounding community.”

Had I been granted a question, I might have inquired, “Then why is the US government spending billions to support the government of Hamid Karzai?” But I was not called on. In fact, the reporters Obama selected for questions represented the usual suspects: the broadcast and cable networks, the major wire services, The New York Times, The Washington Post, and NPR. The one wild card: Huffington Post. And Obama picked reporters off a list he had on the podium, causing other journalists in the ornate East Room of the White House to grumble about a Bush-like lack of spontaneity and accountability. Obama also batted back the suggestion that he had to be more bipartisan. For the past weeks, several White House reporters have fixated on Obama’s inability to win over Republicans for his stimulus plan. At the daily White House press briefings, they have repeatedly asked about this, concocting the story line of a president failing at bipartisanship. At the press conference, NPR’s Mara Liasson picked up on this theme and posed this query:

What do you think you’re going to have to do to get more bipartisanship? Are you going to need a new legislative model, bringing in Republicans from the very beginning, getting more involved in the details yourself from the beginning, or using bipartisan commissions? What has this experience with the stimulus led you to think about when you think about these future challenges?

Obama returned to Elkhart, replying that the people in distress there cannot afford the usual Washington jockeying. But, he pointed out, he had spoken to Republicans and had included their favorite idea–tax cuts–in the original stimulus bill. He referred to Republican “ideological blockage.” But he would not engage in name-calling or blaming. “I think that over time people respond to civility and rational argument,” he remarked. “I think that’s what the people of Elkhart and people around America are looking for.” Perhaps. They are also looking for results. And many, if not most, Americans would probably trade bipartisan hurrahs inside-the-Beltway for legislation that they believe could help the economy.

Yet some within the Washington press corps seem intent on judging Obama by the number of Republicans who vote for the stimulus bill. One signficiant political question, though, remained after the press conference: why hasn’t Obama mobilized his millions of supporters to pressure Congress to pass the stimulus bill? Throughout his press conference–which began with eight minutes of prepared remarks on the economy and the need for this legislation–Obama never urged his backers to call (or email) their representatives and senators about the stimulus bill.

He continues to play it cool on this front. The fellow who won the White House because he persuaded millions to join a movement for change has so far elected not to engage those people directly in the fight for the stimulus bill. In fact, shortly after the press conference ended, Organizing for Obama, the Obama campaign spin-off, sent out an email to its list of 13 million names. The email noted that Obama supporters had held 3,587 “Economic Recovery House Meetings” this past weekend to discuss the stimulus plan. The email did not request that Obama supporters do anything specific to push the stimulus plan through Congress. Instead, it asked them to share their stories about how the economic crisis is affecting them, directing these supporters to a website where they could post text, photos, or videos illustrating their tales. “Once you submit your stories,” the site says, “they’ll be made available to the public to show how critical it is to support the economic recovery plan.”

Sharing stories is not often the critical component of an organizing campaign. At the prime-time press conference, Obama did share stories from Elkhart and elsewhere. And the following morning, he was off to Fort Myers, Florida, where he could gather (and highlight) more tales of economic misery. Yet he still has not told the people starring in these stories what they could do to help him change the narrative. And at the press conference, no one asked him why not.