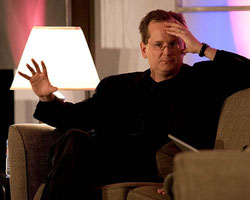 Lawrence Lessig has a new cause—and new job to go with it. For more than a decade, the Stanford law professor and Creative Commons founder has focused his efforts on Internet and copyright issues, advocating a “free culture” that puts fewer legal barriers in the way of artists who adapt and build upon the works of others. Now he says he’s finished his final book on the topic, Remix, and he recently announced that he will leave Stanford to run the Edmond J. Safra Foundation Center for Ethics at Harvard. From this new perch, Lessig will take aim at his latest target: corruption, particularly as it relates to the influence of money in politics. Last year, Lessig launched a new project, Change Congress, which calls on politicians to back four corruption-fighting reforms: stopping contributions from lobbyists or political action committees, ending earmarks, increasing congressional transparency, and supporting public financing of congressional campaigns. The organization also provides online tools that allow voters to see which politicians support these reforms, donate money to politicians who stand against corruption, and “pester” elected officials who have yet to take a stand. The organization’s latest project is a nationwide “donor strike” asking citizens to refrain from donating money to political campaigns until Congress takes steps to limit the influence of money in politics. Mother Jones spoke with Lessig recently about his new job, his hopes for Barack Obama’s presidency, and how corruption poisons politics. The interview has been edited for clarity and length.

Mother Jones: When you announced your decision to leave Stanford for the Safra Center, you indicated that your new focus on corruption would become “the primary focus of the Center, and complement its mission.” Do you think it will be hard to refocus an entire institution like the Safra Center on one specific issue?

Lawrence Lessig: No, because it’s a dictatorial organization. The director gets to choose. I’m joking. In theory it would be hard, but the negotiations that led to my acceptance of the position were pretty clearly focused around the idea that at least part of the work of the center is going to be redirected towards this problem. Nobody expects that we’re going to dismantle the ongoing life of the center and direct it exclusively to this, but certainly this is going to be some of its work for the next five years.

MJ: Is there going to be a redesign of the Safra website in the works? It’s pretty Web 0.5…

LL: Oh my god, yes. There’s actually one that I’ve learned is in the works right now. I have not seen it yet. So that might be fine, but yes, a lot of work to do on the Web.

MJ: Are you leaving most of your copyright work at Stanford, in the hands of the institutions that you’ve worked with there? Or are you going to be bringing part of that to Harvard?

LL: I don’t think I’m going to be continuing the work on copyright-reform issues. I still am on the board of Creative Commons, and obviously will work to support that organization as much as I can, but I’m trying to be very disciplined about focusing exclusively on this new area. The complication to that is this book that I finished a year ago that I’m talking about, so I’m going to have to continue talking about that book, Remix, but once that’s in the rearview mirror then I think that’s it.

MJ: You supported Barack Obama for president. Is he the person to fix Washington? Do you trust that Obama is going to follow through on his promises?

LL: He certainly is going to follow through on his promises, but the question is what’s the set of priorities. I’ve described this analogy: Imagine you have cancer and you’re going to the hospital for chemotherapy and on the way you’re the victim of a drive-by shooting. That’s kind of the state of our nation today. So Obama early in his campaign was talking about the cancer, and then on the way to the election we had this series of catastrophes which have created this traumalike situation, so he’s got a certain amount of triage that has to be engaged in immediately, for the next chunk of time. And then the question is whether he gets beyond that to the more fundamental questions of change that he always was focusing on. I don’t doubt that he’d want to do it, but the question is whether he’s going to be focused enough to get it done.

MJ: It’s not just Obama that needs to act for this change to happen, though; it’s also Congress—that’s why you founded Change Congress. Are you surprised that sitting members might be reluctant to take a stand on corruption?

LL: I’m not surprised. My view has always been that the problem here isn’t Democrats or Republicans: The problem is both. The problem is incumbency, and any system that changes the dynamics of incumbency is going to be resisted by the incumbents, and I think that’s what we’re seeing. We have a set of strategies about how to overcome that, but it’s only going to come from lots of pressure on the outside trying to force the system on the inside to change.

MJ: So have you been disappointed in the progress so far?

LL: I’m constantly disappointed in the sense that I always think we should be able to do more. I guess I’m not surprised. I wish that we had accomplished more, and we’re thinking about a way to refocus to accomplish more. McCain was pretty good at creating ambiguity about who is the party of reform, and that made it hard to focus on the reform issue tied directly to one movement during the presidential election. So it got to be a more complicated debate than any of us thought six months ago.

MJ: You said that Obama has a lot of different problems he has to deal with, but let’s say it’s April or May and Congress has decided, well, maybe we should address this corruption issue. Do you see yourself in the role of going to Washington and testifying and talking to members of Congress about this issue?

LL: If I were asked to testify about it, I would of course testify, but I don’t actually think that there’s a lot of progress to be made walking around Washington thinking about this issue. That’s not the target of my work. There’s been 100 years of people thinking about how to reform Washington, and some great work has been done on it, but a lot of this has to be done by people who don’t have an interest in going to Washington, who don’t have an interest in becoming part of the system, but instead just want to make the system function. That’s where I think I would come into it.

MJ: You mentioned in one of your recent talks that 68 or 69 percent of Americans support some form of public financing. But the old criticism of that is that while people tend to support process reforms, they don’t tend to get excited about them.

LL: That’s been the historical experience over the past 40 years, but process reforms in our history have been quite important moments of constitutional change. The Watergate changes were a set of process reforms. The challenge is, how do you phrase issues so that people begin to recognize that the issue that they’re most concerned about—whether it’s global warming, or health care, or safety in the workplace, or safe foods for their kids to eat—is at base also an issue about the kind of corruption that I am focused on. We’re thinking, how do you get people to have a refrain in their head: “It’s the money, stupid.” That’s the constant single thread that links these problems that people look at, and at a certain point, get people to recognize they’re just going to have to do something about this underlying problem. It’s hard. I just don’t accept the idea it’s impossible, which is what people typically infer from the common wisdom about process reform. Reform is possible, especially here, especially because so many people are so deeply convinced about the underlying predicate for that reform, namely that the system is corrupt.

MJ: You’ve been saying that it’s not just government that faces these corruption issues. It’s doctors, scientists, lawyers, journalists as well. So even if you do fix this on a governmental level, how can you address the corruption within the professions?

LL: That’s the purpose of this five-year project that I’ve launched at the ethics center at the Harvard Kennedy School. The strategy is first to make the similar problem across these domains visible, so that people can begin to see something they’re familiar with is actually similar to a problem that’s existing in science or in journalism or in government. So you can begin to see a common problem, a common thread, and then recognize very plainly the costs that this common problem poses across a whole series of institutions as a way to build a resolve to address it.

Now, I’m not so naive as to think that we’re going to build overnight the will to resist it across the domains. It’s not a black-and-white problem; it’s largely a problem of degree. What we’ve seen happen since the mid-1980s is a slow shift to a kind of norm or ethic that accepted that whatever private return you can extract, it’s okay for you and okay for the system to encourage that. And it would be enormously beneficial even just to turn that back four or five notches in the other direction, so more and more people find moments or opportunities in their professional experience and private life to resist that dynamic.

I don’t think someone’s going to write a book and it’s going to change the world, but I do think that if we start a conversation that hundreds, thousands of people begin to participate in to focus on this problem, that we can begin to move the dial back the other way. At least that’s the hope, because I don’t see any other way of doing it.