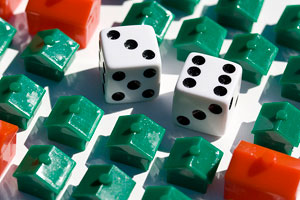 The financial crisis is even worse than people think (and people already think it’s pretty bad), and we aren’t doing enough to stop it, economist and Mother Jones contributor James K. Galbraith told the House Financial Services Committee on Thursday morning. From his prepared testimony:

In 1930, John Maynard Keynes wrote, “The world has been slow to realize that we are living this year in the shadow of one of the greatest economic catastrophes of modern history.” That catastrophe was the Great Crash of 1929, the collapse of money values, the destruction of the banking system. The questions before us today are: is the crisis we are living through similar? And if so, are we taking adequate steps to deal with it? I believe the answers are substantially yes, and substantially no.

Galbraith pointed to six significant problems with the Obama administration’s response to the financial crisis. First, he said, the White House is being way too optimistic:

… [B]ad news has been outrunning the forecasts for months. Professional economists, working with the normal models, failed to predict the crisis. In many important cases, including high officials, they actively denied it could happen. Chairman Bernanke was typical: through July of 2007, he argued that the Federal Reserve Board’s predominant concern was inflation; thus the Federal Reserve was unable to give Congress a foretaste of a crisis that was to erupt within days. And as the crisis has unfolded, events have repeatedly come in worse than expected or caught us by surprise. This should
tell us something.

Second, we know that the origins of the crisis lie in a breakdown of the banking and financial system, following a breakdown in the regulation of mortgage originations, in underwriting, and in credit default swaps. This is something we have not seen in our lifetimes. We know that the actions already taken in response – the TARP, the nationalization of the commercial paper market and the swap agreements with the ECB and other central banks – are unprecedented. We know that these measures have, at best, only averted a deeper catastrophe. And we know that the baseline forecast, which is a mechanical procedure based on statistical relationships between non-financial
variables, for the most part, takes none of this into account.

We therefore have no basis for confidence in the baseline forecasts, and we should prepare ourselves, as Churchill said to Parliament at
the time of Dunkirk, “for hard and heavy tidings.”

The second problem Galbraith identified with the Obama administration’s response to the crisis is an over-reliance on monetary policy:

[M]onetary policy today has little power to restore growth. In the Depression they called it “pushing on a string.” With interest rates already at zero, there is little more the Federal Reserve can do.

The bank plan appears to turn on a metaphor. Credit is “blocked” or “frozen.” It must be made to “flow again.” Take a plunger to the
toxic assets, a blowtorch to the pipes, it’s said, and credit will flow. This will make the recession essentially normal, validating the baseline forecast. Add the stimulus to a normalization of credit, and the crisis will end. That’s the thinking, so far as I can tell, of the Treasury department in this new administration.

But common sense begins by noting that the metaphor is wrong. Credit is not a flow. It is not something that can be forced downstream by clearing a pipe. Credit is a contract. It requires a borrower as well as a lender, a customer as well as a bank. The borrower must meet two conditions … [creditworthiness and willingness to borrow] … The “credit-flow” metaphor implies that people came flocking to the auto showrooms last November and were turned away because there were no loans to be had. This is not true. What happened was that people stopped coming in. And they stopped coming in because, suddenly, they felt poor, uncertain and afraid.

In this situation, stuffing the banks with money will not change their behavior… [T]he bank chiefs have made it very clear, in testimony here and elsewhere: they will not return to ordinary commercial, industrial and residential lending until they can see a reasonable way to make money at it… More likely, they will hunker down, invest in Treasuries and prime corporate bonds, and rebuild capital for the long-term, as they did from 1989 to 1994. Only this time, with the yield curve as flat as it is and the insolvencies as deep as they are, it could take a decade or longer.

The Treasury plan, if put in place as described, would have a perverse effect on the distribution of wealth. To guarantee bad assets at
rates above their market value is simply a transfer to those who hold those assets. It would enable them to convert those assets, sooner or later, to cash. The plan would thus preserve the wealth of bank insiders and financial investors, while failing to prevent the collapse of the wealth of almost everyone else. I cannot believe that the American public will tolerate this, for very long.

In short, the Treasury plan will not achieve its stated goals, and
meanwhile risks both triggering inflation and obstructing growth.

Galbraith sees no alternative to putting “several very big banks” that are “deeply troubled” into receivership, breaking them up, firing existing management, and selling them in parts or relaunching them as “multiple mid-sized institutions. While that happens, he says, there should be a publicly-run bank “to provide the loans to businesses – small, medium and
large – sufficient to keep them running through the crisis,” as the Reconstruction Finance Corporation did during the Depression.

The fourth point that Galbraith emphasizes is that Social Security and Medicare are not causing our problems, and a “preoccupation” with the two programs is “actively dangerous to the prospects for economic recovery.” He calls for a “permanent increase” in Social Security benefits, a payroll tax holiday, and a reduction in the age of eligibility for Medicare:

These measures are among the most promising available at this moment. Congress should be prepared to use them if and when it becomes clear that the present policies are insufficient.

“The housing crisis,” Galbraith says, “is at the root of our difficulties,” but “There is no way for public policy to stabilize housing prices as such in the near term.” But there are other things we can do, and in this sphere, at least, Galbraith thinks the Obama team is on the right track:

The administration’s plan of action in the housing sphere is a bright spot on the policy horizon. It meets, so far as I can tell, the tests
of fairness and sustainability reasonably well. But it does so only for a limited class of borrowers, who are not too deeply underwater already on their homes. It will provide a measure of relief, but it will not, so far as I can tell, either stop the wave of foreclosures or prevent a continued decline in prices.

Galbraith points to two alternative housing plans that “might work.” The first is a moratorium of new foreclosures and the creation of an organization like the depression-era Home Owners Loan Corporation “for triage and renegotiation on a case-by-case basis.” (James Ridgeway, Mother Jones‘ senior Washington correspondent, called for a similar plan in September.) The other alternative would be to allow the normal foreclosure process to work but to have the government buy foreclosed homes and allow the previous owners to rent their houses while maintaining an option to repurchase their homes from the government at a later date. “This would have the advantage of protecting against moral hazard, while at the same time preserving occupancy, to the maximum extent possible,” Galbraith says.

Finally, Galbraith says, the Obama administration has to think long-term, especially about infrastructure, energy, and the dollar. He calls for curtailing crude oil imports, instituting a national infrastructure fund, and conserve energy. On the dollar, he says:

[While] the world crisis has revealed the relative strength of the dollar and the structural weakness of the euro and of other major currencies, … it awakens an equally serious danger, which is that instability between world currencies could produce a cumulative spiral of global economic collapse. This is an important danger, for which we are ill-prepared. There needs to be a new
attention to the financial architecture, both to achieve a coordinated fiscal expansion and to admit the serious possibility of an even larger crisis.

The bottom line, Galbraith emphasizes, is that he believes “we are not in a temporary economic lull, an ordinary recession, from which we will emerge to return to business-as-usual.” Instead, he says, “We are at the beginning of a long, profound, painful process of change.” On that last bit, at least, Galbraith and the Obama administration can probably agree.