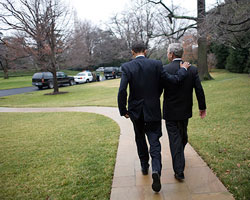 How hard is it to change the ways of Washington?

It turns out it can be quite difficult if you rely on the same old Washington players.

Killefer, an executive at McKinsey & Company, a strategic management consulting firm, had committed a routine transgression: she had failed to pay unemployment taxes for household help. Daschle, though, had a more unusual problem: he had failed to pay taxes for a car and driver that had been provided to him by Leo Hindery, a financier who had retained Daschle as an adviser. But perhaps more worrisome was Daschle’s post-Senate career, in which he has made millions of dollars not by lobbying but by providing strategic advice to lobbyists and by giving speeches to health care firms.

Daschle was just one of several high-profile Obama appointees who have turned public service into private wealth. George Mitchell, Obama’s Mideast envoy, is a senior leader of DLA Piper, a powerful lobbying shop and law firm in Washington. Mark Patterson, chief of staff at the Treasury Department, was a lobbyist for Goldman Sachs. William Lynn, Obama’s No. 2 at the Pentagon, was a lobbyist for Raytheon, a major military contractor. Both Lynn and Patterson have had to receive waivers from the Obama administration’s tough ethics rules.

Why has Obama had to turn to former lobbyists and major Washington string-pullers? At Tuesday’s press briefing, I asked White House press secretary Robert Gibbs if Obama was finding it tough to change Washington. Here’s the exchange:

Q: On the campaign trail…the President often talked of changing the ways of Washington. Look at some appointments that have failed or had some bumps: Tom Daschle, he wasn’t a lobbyist, but he made a lot of money giving strategic advice to lobbyists; George Mitchell more or less did the same thing; Mark Patterson, chief of staff to Timothy Geithner, lobbied for eight years for Goldman Sachs on a host of issues; and you have the number-two man at the Defense Department, too, having been a lobbyist. Is it more difficult than you or the President imagined to actually change the ways of Washington? Are you somewhat hindered by relying on this — some of the same old players in Washington?

A: I think the President would say to you that he didn’t believe that we were going to change the way Washington has worked the past three decades in the first two weeks of this administration. I think that’s accurate to believe. I would point you to, again, a set of ethics requirements that exceed any that have come before. David, anybody that walks in and serves in this administration will — can never walk out of it and lobby this administration.

Is changing the way Washington works going to be more than a two-week job? Yes, it is, and thankfully we’ve got four years to try.

Q: Well, do you think we’ll have — will there be other questions on other nominees, or are you perhaps changing your perspective on some of this as you move along?

A: Again, the President is quite confident in the staff that surrounds him and the staff throughout the executive branch.

The real question is, will the Obama administration, as it continues to staff up, now shy away from Daschle-like players? Given that the other three examples I cited in my question for Gibbs all made it to their respective desks, the answer might well be, no. And it could be that Obama and his aides believe they need such experienced hands. Certainly, there will be tougher vetting, and unpaid taxes will more likely be a disqualification for potential appointees. But having raced through Washington’s revolving door and cashed in may not prevent anyone from receiving a job in the Obama administration. (See Eric Holder.) Changing that particular way of Washington may be too much change for the Obama White House.

Photo from the Obama-Biden transition team used under a Creative Commons license via flickr.