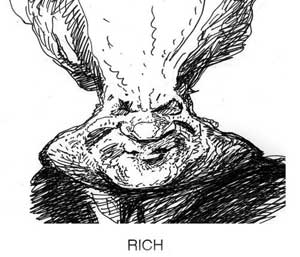 Does anybody “know” anything? Frank Rich on Sunday threw a parade for Obama and the package:

“But we do know this much. Just as in the presidential campaign, Obama
has once again outwitted the punditocracy and the opposition. The same
crowd that said he was a wimpy hope-monger who could never beat Hillary
or get white votes was played for fools again.”

Rich seemed unfazed by the small army of vexed economists who supported Obama but came to the opinion that an event of this size needs a commensurate response.

“…The stimulus is too small by about a factor of three. Just to take one example, state and local governments are going to be out of revenues to the tune of $400 to $500 billion over the next two years. The money in the stimulus package, about $140 billion. So, you know, these are layoffs of teachers and police and fire and cuts in programs that are completely needless. All the government has to do is write a check, and state and local services can continue.”

Obama, so caught up in his GOP courtship, came up with a package just south of conservative. But what do we NEED?

“For while Mr. Obama got more or less what he asked for, he almost certainly didn’t ask for enough. We’re probably facing the worst slump since the Great Depression. The Congressional Budget Office, not usually given to hyperbole, predicts that over the next three years there will be a $2.9 trillion gap between what the economy could produce and what it will actually produce. And $800 billion, while it sounds like a lot of money, isn’t nearly enough to bridge that chasm.

“Officially, the administration insists that the plan is adequate to the economy’s need. But few economists agree. And it’s widely believed that political considerations led to a plan that was weaker and contains more tax cuts than it should have—that Mr. Obama compromised in advance in the hope of gaining broad bipartisan support. We’ve just seen how well that worked.”

And last night on Olbermann:

“I’m almost sure we’re gonna have to come back for more…a Stimulus 2.0 to deal with this.”