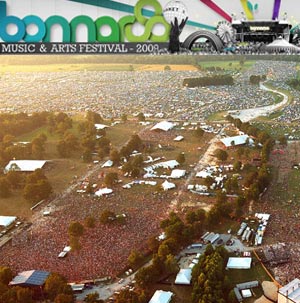 I know you; you were just sitting there thinking, “Boy, I’d really like to go to Bonnaroo, the long-running Tennessee music festival, this year, but I just don’t think one Phish performance will be enough for me.” Well, don’t fret: Phish will be playing two shows at this year’s Bonnaroo, set for June 11-14, way out in the woods or wherever that thing is. You’ll be so full of Phish you’ll—what, I can’t make a joke about “barfing up a tilapia?” Damn you Mother Jones and your editorial standards…

The ‘roo has always been the dirty hippie cousin to Coachella’s expensive-sunglasses-wearing LA fashion brat, but in all honesty their lineup gets better every year. In addition to that Phish deal, Bonnaroo 2009’s got Bruce Springsteen, the Beastie Boys, Nine Inch Nails, Wilco, Snoop Dogg, Erykah Badu, and Paul Oakenfold, as well as Party Ben faves TV on the Radio, of Montreal, Santogold and even Robyn, whose haircut is much more Coachella-y.

An interesting development in this year’s festival circuit is an apparent acknowledgement of the tough economic situation: you can now pay for your ticket on the installment plan. Both Coachella ($269 + service fees + $3 charity) and Bonnaroo (from $224-$249 + service fees + $3 charity) offer the ability to spread your payments out over time, with Bonnaroo offering five easy payments and Coachella giving you the option to pay in two or three payments. Maybe they should start offering lower-class tickets, where for half price, we’ll promise to sit in one spot and not take up room in the beer line?

Full Bonnaroo lineup after the jump.