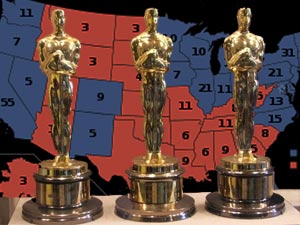 If you thought you had post-election letdown syndrome, with the endless hours of TV punditry and blog pontification that once filled your days and nights suddenly evaporating, imagine what Nate Silver feels like. His labor-intensive web site, fivethirtyeight.com, rocketed to prominence last year as the most reliable and thorough electoral predictor around, but after the election, what does he have to post about? Well, it turns out his geeky brilliance can be used to predict other things as well, including the lame old Oscars, heading to your TV this Sunday. Silver fed the history of Oscar winners into his supercomputer for New York magazine, and the results included both the obvious and the somewhat surprising.
Slumdog Millionaire is given a 99% chance of winning Best
Picture, and director Danny Boyle gets an even higher 99.7% chance of
winning Best Director, with only Milk and Gus Van Sant having
an outside chance at the statues. The late Heath Ledger is an 85% lock on Best Supporting
Actor, while Mickey Rourke has a slightly less assured 71% chance at
Best Actor (compared to Sean Penn’s 19%). Kate Winslet gets a 67.6%
shot at Best Actress although Meryl Streep is her only competition at
32.4%, but it’s the Best Supporting Actress category that has a surprise: Benjamin Button‘s Taraji P. Henson has a 51%
chance, followed by Penelope Cruz at 24.6%, an inversion of the apparent conventional wisdom. The magic computer’s
reasoning was that Henson is the only actress in the category whose
film is also a Best Picture nominee, which turns out to be a major correlative
factor. So, if you want to win the $10 at your Oscar party, you might
want to consider Silver’s analysis, as well as my own motto when it
comes to picking winners: “The Oscars: It’s Not About Good Movies!”