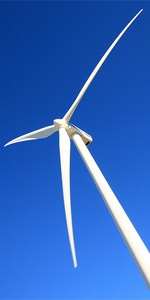 The wind energy industry is growing quickly and now employs more people than the coal industry. A report released this week by the American Wind Energy Association (AWEA) finds that 85,000 people work in wind, up from 50,000 a year ago. Todd Woody at Fortune‘s Green Wombat points out that 81,000 people work in the coal industry and notes, “Those figures are from a 2007 U.S. Department of Energy report but coal employment has remained steady in recent years though it’s down by nearly 50% since 1986.”

While there is growing demand for wind as an alternative energy source, and the industry is responding in kind—wind power generating capacity increased by 50% in 2008—it is not insulated from the broader economic slowdown. The AWEA reports that by the end of 2008 “financing for new projects and orders for turbine components slowed to a trickle and layoffs began to hit the wind turbine manufacturing sector.” Notes AWEA CEO Denise Bode, granted with a vested interest:

“The U.S. wind energy industry’s performance in 2008 confirms that wind is an economic and job creation dynamo, ready to deliver on the President’s call to double renewable energy production in three years. At the same time, it is clear that the economic and financial downturn have begun to take a serious toll on new wind development. We are already seeing layoffs in the area where wind’s promise is greatest for our economy: the wind power manufacturing sector. Quick action in the stimulus bill is vital to restore the industry’s momentum and create jobs as we help make our country more secure and leave a more stable climate for our children.”

So it’s probably good for the wind industry that the House just passed Obama’s stimulus package, the American Recovery and Reinvestment Plan, which, as the Congressional Quarterly noted, “includes $20 billion for the renewable-energy sector, including a three-year extension of the tax credit for producing electricity from wind.” Needless to say, the investors are watching.

[Update: As commenters have pointed out, it seems I’ve fallen pray to a bit of an apples/oranges comparison here: The job figures for the coal sector only counted miners, while those for wind were all-inclusive. However, the trajectory for each industry remains clear: Coal is shedding jobs while wind is growing quickly.]

[Late update: Interior Secretary Ken Salazar—”Windmills off the East Coast could generate enough electricity to replace most, if not all, the coal-fired power plants in the United States.”]