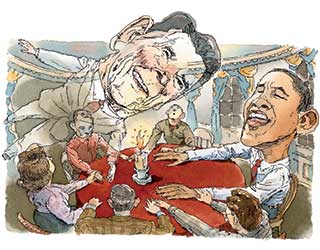 It was Barack Obama’s first official joke as president-elect. At his postelection press conference, Obama was asked if he had talked to “any living ex-presidents.” He replied, “I’ve spoken to all of them that are living,” and then quipped, “I didn’t want to get into a Nancy Reagan thing about, you know, doing any séances.” Actually, as first lady, Nancy Reagan consulted an astrologer for guidance, not a medium for a connection to the other side. Afterward, Obama called her to apologize for what he called a flip comment. But if there were to be a séance at 1600 Pennsylvania Avenue, Obama would do well to ask for Ronald Reagan.

As Obama prepped for his presidency, many among the politerati suggested he study the opening months of Bill Clinton’s first term, in part to avoid Clinton’s early errors. But the new president might do better to look at the last time someone rode a grassroots movement into town and promised wholesale change. Reagan both wowed Washington and bent it to his will—at least at first—and he did so in a manner that veteran Reaganites say Obama can emulate and even improve upon.

“The chief parallel between Obama and Reagan,” says David Gergen, who served as White House communications director during Reagan’s first term, “is that they raised expectations, and each had the capacity to play inside and outside games.”

Reagan’s aim, says Edwin Meese, a longtime aide who came to Washington with Reagan, was, of course, “to bring change to Washington—but he went out of his way to indicate he was not hostile to the people of Washington.” Case in point: Shortly after arriving in DC for the transition, Reagan accepted an invitation to a dinner party at the Georgetown home of Katharine Graham, the publisher of the Washington Post and the doyenne of permanent Washington. After the soiree, the Wall Street Journal noted that a photograph of Reagan embracing Graham would upset conservatives. Sure enough, right-wing leader Howard Phillips groused that if “the Washington establishment is happy with Ronald Reagan, then you should be unhappy with Ronald Reagan.”

But as Reagan charmed the city—”I remember him going to a lot of dinner parties,” Meese told me—he filled his administration with a mix of old DC hands who knew how to navigate the corridors of power (James Baker and Caspar Weinberger) and outsiders he’d worked with as governor of California (Meese, Michael Deaver). “It was a good mix of fresh perspective and seasoned expertise,” recalls Ed Rogers, who held various White House positions during the Reagan years.

Reagan’s first months as president could be instructive for Obama in another way. The new president assumed office determined to pass a dramatic economic package that included draconian cuts in social spending (“I’m trying to undo the Great Society,” Reagan wrote in his diary) and deep tax cuts reflecting his fervent belief in supply-side economics. The Democrats controlling the House vowed to resist; Speaker Tip O’Neill fulminated that Reagan was “soaking the poor to subsidize the rich.” So the old actor did what he did best: He hit the airwaves, delivering televised speeches urging his supporters to pummel Congress. (Meese notes that Reagan was one of the first governors to hold weekly press conferences, an attempt to communicate more directly with constituents.)

Reagan also whipped up his beyond-the-Beltway backers. To pressure lawmakers in their home districts, White House political director Lyn Nofziger, his deputy, Ed Rollins, and Elizabeth Dole, who headed the White House public liaison office, worked with the network of right-wing citizens groups that Richard Viguerie, Paul Weyrich, and others had been building for years. Says Gergen, “Reagan had a well-mobilized base. He could go on television on a Wednesday and by Thursday morning, thousands of telegrams and calls were going into the offices of members of Congress.” The message: Do what the Gipper says. “Out of the box, Reagan was creating broad national support,” says Kenneth Khachigian, his chief speechwriter early on. “It was critical to get moving and not let the other side develop too much resistance.”

Meanwhile, the White House schemed with savvy allies on Capitol Hill to set up votes to the president’s advantage. And Reagan personally lobbied hundreds of members of Congress, paying special attention to the Boll Weevils in the House—conservative Southern Dems who in 1980 had seen Reagan bag more votes in their districts than they had.

In the end, it all worked—the outside pressure, the inside maneuvers. O’Neill could not keep his caucus united against Reagan. Congressional Democrats “say they’re voting for [Reagan’s plan] because they’re afraid,” Rep. Toby Moffett (D-Conn.) complained at the time. The Boll Weevils broke with their party and gave the president what he called “the greatest political win in half a century.”

Twenty-eight years later, ex-Reaganites note that along with oratorical skills that rival the Great Communicator’s, Obama has something Reagan could not have dreamed of—the Internet. (See “Shift + Control.”) Imagine if Reagan had been able to send a text message to millions of supporters immediately after a speech: “Have you contacted your representative and senator and told them to pass the Economic Recovery Tax Act?”

From his very first staffing decision—picking the take-no-prisoners, fiercely partisan Rahm Emanuel to be his chief of staff—Obama signaled that he would be playing a hard inside game. “Washington is a machine that must be operated by a skilled operator,” notes Ed Rogers. But, as Gergen says, Obama “also has an army on the outside that can pound on the gates of Congress. This is the first time we have a president who understands the power of communication and understands the Internet.”

For Obama, Khachigian says, the key takeaway from the Reagan experience ought to be that “it was clear you couldn’t get this fairly revolutionary plan in place in the midst of a difficult economy unless there was some kind of clamor back home.” Reagan engaged his supporters and made them feel they were helping with the heavy lifting. Referring to a televised speech Reagan gave right before a House debate on his tax cuts, Khachigian, who worked on the address, cites a key passage: “I’ve not taken your time this evening merely to ask you to trust me. Instead, I ask you to trust yourselves…It’s been the power of millions of people like you who have determined that we will make America great again. You have made the difference up to now. You will make the difference again.” Obama, Khachigian points out, could practically lift lines like these when it comes time for coaxing legislators to get with his program.

Reagan’s favorite saying, Khachigian adds, was “If they won’t see the light, we’ll make them feel the heat.” He suggests that Obama keep that in mind: “He’s got political capital in the bank. Now is the time to spend it. If he becomes cautious, he’ll get eaten alive.” Noting that Obama, like Reagan, has a political base that is also a movement, Rogers cautions that the new president will need “people from the outside who are not mentally corrupted by the incrementalism that has infected Washington. Reagan got elected to change the world, not to manage the government.”

Clearly, Obama has pondered how a chief executive can bring about a big shift. During the primary campaign, he noted that “Ronald Reagan changed the trajectory of America in a way that Richard Nixon did not and in a way that Bill Clinton did not.” And Gergen says, “I’m told by some of the Obama people that Obama is very interested in the Reagan story.” For anyone hoping Obama can pull off the change he’s promised, that’s a good sign. Too bad a séance can’t be arranged.