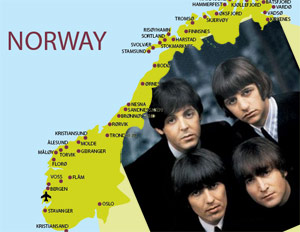 As a Swede, I have to say it doesn’t surprise me that those miserable, cheap Norwegians were behind this. And don’t get me started on the Finns. Norway’s national broadcaster NRK announced yesterday that it had discovered a crazy loophole in its podcasting rights agreement that allowed it to offer free downloads of basically every Beatles song ever. How, you say? The station had broadcast a series in 2007 called “Our Daily Beatles” in which each episode featured one Fab Four song and the story behind it. Then they discovered that their agreement with London-based recording industry rights organization IFPI seemed to indicate they could offer the series, complete with music, as a podcast, effectively allowing for the entire Beatles catalog to be given away. Since the Beatles are famous holdouts from digital stores like iTunes, this would have been the only legal way to get mp3s of their music.

Of course, there’s no way this could have been real, since the Beatles, like Oprah, don’t obey the law, they make the law. While I have no evidence anyone from NRK was severely beaten, they did come out with a very contrite statement today: it turns out that they can only “put up shows for download that were aired the latest four weeks, and where the music is less than 70% of the show’s length. ‘Our Daily Beatles’ aired in 2007, so we have to pull the podcast.” And please, Yoko, take the electrodes off my nipples!