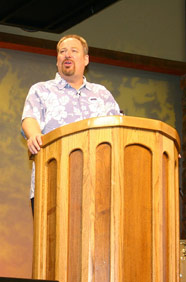 If you were wondering if there was any way for you to be more perturbed at Rick Warren, get ready to have your life be even more purpose-driven. The Daily Beast is reporting that the mega-church pastor’s work on AIDS in Africa, held up by the Obama team as “one of the things on which they agree,” has close ties to anti-gay, anti-condom activists, and according to a UN envoy, is “resulting in great damage:”

Warren’s man in Uganda is a charismatic pastor named Martin Ssempa. The head of the Makerere Community Church, a rapidly growing congregation, Ssempe enjoys close ties to his country’s First Lady, Janet Museveni, and is a favorite of the Bush White House. In the capitol of Kampala, Ssempa is known for his boisterous crusading. Ssempa’s stunts have included burning condoms in the name of Jesus and arranging the publication of names of homosexuals in cooperative local newspapers while lobbying for criminal penalties to imprison them.

Of course, Warren also has links to the Bush administration: one official administering the president’s $15 billion anti-AIDS initiative who appeared at Warren’s church said in 2004 that condoms “have not been very effective.” The article details how Republican-allocated funds were used “exclusively” for abstinence education, which of course led to an increase in infection rates. With evidence mounting, the newly Democratic congress tried to remove the abstinence-only earmark last year, only to be fought by Warren, who claimed that the provision’s removal would increase sex trafficking of young women. The pastor has also apparently been vocal in his support of virulently anti-gay Ugandan Anglicans. Sure makes comparing gay marriage to pedophilia and incest seem like a friendly pat on the back, doesn’t it.

Photo used under a Creative Commons license from Flickr user All About You God.