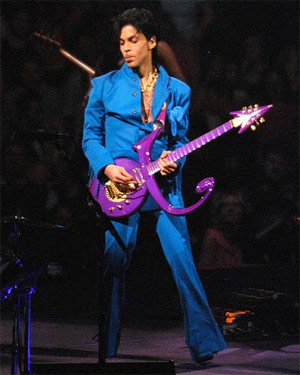 Prince has announced he will be releasing two new albums under his own name and one by singer Bria Valente which he’s apparently producing. All three will be released outside the traditional record label system. The notoriously reclusive singer revealed the details in an interview with the LA Times, who sent a reporter up to Prince’s Mulholland Drive mansion for an experience that sounds even weirder than the movie of the same name, featuring plexiglass pianos, cars named Miles Davis, and why Jehovah’s Witnesses don’t vote:

The next five hours took me … to a car Prince referred to as “Miles Davis,” where we listened to one set of songs; into a back room furnished with a round bed, faux-fur carpeting and a plexiglass Rhodes piano, where he played cuts by his new protege, the comely Bria Valente; and into that white limo, where the entirety of “Lotus Flower,” the album previewed earlier this month on Indie 103.1, boomed through the speakers as we drove through Hollywood.

Jeez, did he take you to Club Silencio, as well? No hay banda! Actually, the new music sounds intriguing: Lotus Flower, befitting its Indie 103.1 premier, is guitar-based and appropriately rock-y, while MPLSOUND pays tribute to its namesake city with electronic beats and Pro Tools experiments. So when Prince thinks of the Minneapolis Sound, I guess he’s thinking of Information Society, not The Replacements. The albums will be released both digitally and physically, via an “elaborate” web site as well as through an exclusive retailer, but no labels shall sully it with their logos.

After the jump: so did Prince vote for Prop 8?

The interview also gets into the controversy over Prince’s apparent support of anti-gay marriage Proposition 8 in a recent New Yorker piece. Prince now denies he voted, not just for or against Prop 8, but at all, saying, “I didn’t vote for Obama either … Jehovah’s Witnesses haven’t voted for their whole inception.” Hmm. He also trots out that he has gay friends, which seems to be catching on lately. Whatever: dude gave one of the shows of the year at Coachella back in April, so I’m willing to forgive just about anything.