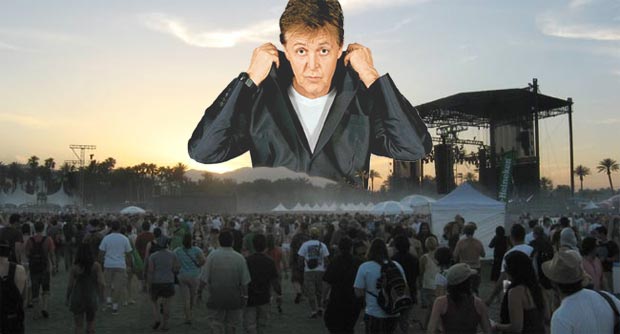 Hey, look at that, Goldenvoice has finally announced the lineup for America’s Favorite Music Festival and Hipster Haircut Showcase, and it turns out all these random rumors about Britney Spears and Katy Perry were just red herrings (thank God) since all the while they were negotiating with none other than Sir Paul. The former Beatle will headline Friday night at the 3-day event set for April 17-19, and he told the LA Times that he’s “really excited to get out there and rock.” Neat, but the Times seems a little skeptical about the whole idea, saying it’s a bit of a gamble:

Booking the former Beatle, who is listed in the record books as the most successful musician in pop history, would be the safest choice imaginable for most music festivals. But the internationally respected Coachella festival, which is set for April 17-19, has been pulling in crowds of more than 140,000 fans by taking an edgier path with alt-rock heroes you would hear on a college town’s pirate radio station. … What remains to be seen is whether the choice will cost the festival credibility with its core clientele: young fans who are more likely to listen to the White Stripes than the “White Album” and who are far more familiar with Rage Against the Machine than “Band on the Run.”

Hey, actually, some of us not-so-young fans were really annoyed with the Rage crowd too. Also on the bill are a couple festival veterans, including The Cure (2004), The Killers (2004) and Morrissey (1999), as well as the finally-reunited My Bloody Valentine (on Cure day, natch). Your ridiculously-named DJ is especially excited about Buraka Som Sistema, TV on the Radio, Friendly Fires, Leonard Cohen, and having margaritas in the hot tub. Full lineup after the jump. 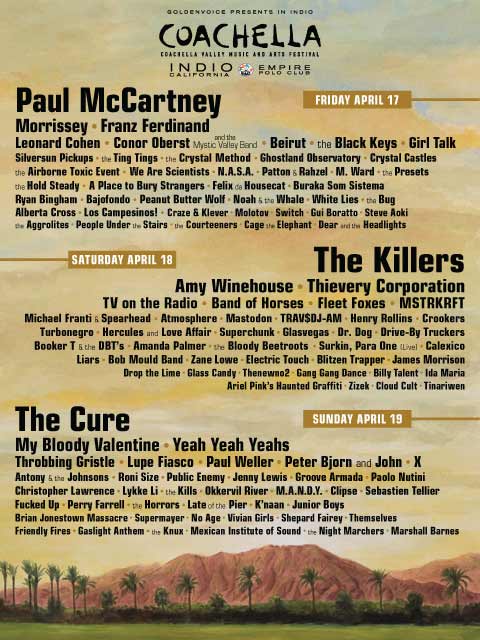