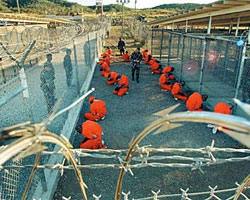 President Barack Obama began his first full day in office with a blockbuster move, ordering that military commissions currently ongoing at Guantanamo Bay be halted for 120 days. It is a dramatic first step toward reshaping the war on terror, and one that is being hailed by human rights groups that have spent recent years fighting the Bush Administration’s detention and interrogation policies. “This is a giant step forward,” Anthony Romero, the executive director of the ACLU, told me. “Had [Obama] not acted today, there was a chance of irretrievable harm occurring at Guantanamo and we would have lost the game before the Obama team hit the field.”

Romero and multiple lawyers for Guantanamo detainees said in interviews Wednesday that though they applaud the 120-day moratorium on the military commissions, they are skeptical of the one-year deadline for closing Gitmo that the Obama administration is reportedly considering. “Closing Guantanamo Bay is not difficult” says Wells Dixon, a lawyer at the Center for Constitutional Rights. “It can be done in three months.”

“We want to see what comes out,” says Romero, noting that his organization seeks “a real plan that is more substantial than just a year, more than generalities.”

That plan will likely be shaped by mid-level Justice Department appointees, whose ranks the Obama team is populating with officials who have been outspoken in their opposition to the Bush administration’s detainee policies.

The man who will take John Yoo’s old job place at the DOJ’s Office of Legal Counsel is Marty Lederman. Like Yoo, he will have the opportunity to craft the legal opinions governing rendition, torture, and a number of other thorny issues. The Georgetown law professor and frequent blogger has been a fierce critic of Bush’s torture policy. Romero says of the pick, “There is a lot of clean-up to do in the Office of Legal Counsel and fortunately the appointments that President Obama has made include individuals with enormous experience and the right values.”

Human rights groups are also thrilled by the appointment Neal Katyal. Also a Georgetown law professor, Katyal argued–and won–multiple detainee cases before the Supreme Court. He represented Salim Hamdan, Osama Bin Laden’s one-time driver, whose successful 2006 case dealt a serious blow to Bush’s military commissions. The Supreme Court held that the commissions violated both the Uniform Code of Military Justice and the Geneva Conventions, and it forced the Bush administration, loathe to share power or ask permission, to approach Congress for authorization of a system to try detainees at Guantanamo. Katyal will be principal deputy solicitor general (a job once held by Chief Justice John Roberts) under Elena Kagan, former dean of Harvard Law School, and will play a key role in determining how to handle war on terror detainees.

As these changes begin, attorneys representing Guantanamo detainees are watching Obama’s first moves closely. “We are sitting and waiting,” says Brent Mickum, who has represented Abu Zubaydah, among other Guantanamo detainees. “What I’d like to see done is for the Obama Administration to open up the system. Make the full torture memos public. That doesn’t cost the Obama Administration anything. They would be held in high regard not only in this country but around the world.” He notes that the Bush Administration argued that Guantanamo cases take so long to prosecute because much of the supporting evidence is classified. “They don’t want any of it to leak out,” Mickum says. Declassifying portions of it “would allow the prosecutions to proceed much more rapidly and people would see the extent to which there is no evidence in most cases. And it would facilitate placing people [in foreign countries].”

Mickum has another request for the Obama team. The US government should say “we’ve made some mistakes,” he suggests. “It’s clear we picked up some innocent people. And we apologize for that.”

Overall, opponents of the Bush administration’s detainee policies are encouraged by what they call Obama’s “first steps.” They point out, as Dixon notes, that “the devil is in the details”–and they are waiting for his next big move. “Guantanamo, it’s history.” says Romero. “It’s just a matter of time.”