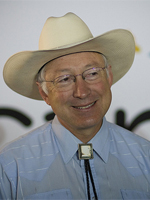 Remember the Interior Department’s sex, drugs, and oil scandal? After investigating, the Interior Department released a September 2008 report that concluded Minerals Management Service (MMS) employees “frequently consumed alcohol at industry functions, had used cocaine and marijuana, and had sexual relationships with oil and gas company representatives.” Several employees were terminated, but only there were only two subsequent convictions. (Read more about MMS corruption here and here.)

U.S. Interior Secretary Ken Salazar said Thursday that he has ordered a re-examination of the scandalized Interior Department division based in Lakewood, including why the U.S. Justice Department did not pursue more criminal prosecutions….

Salazar stressed that he wants to examine why Bush administration prosecutors in the public-integrity unit didn’t pursue criminal cases against others.

“There’s a new sheriff in town,” Salazar said during a news conference at the MMS complex. “We will be visiting with the new U.S. attorney general and take a new look at it.”

As TPMMuckraker notes, Salazar also mentioned re-opening investigations into the Steven Griles affair, in which the Interior Department’s No. 2 was convicted in connection to the Jack Abramoff scandal.

Salazar’s Wild West bluster, complete with bolo tie and cowboy hat, is certainly a welcome change to the industry sweetheart deals of the Bush years. But let’s be honest: the Interior Department is a bureaucratic beast and old habits die hard, especially with the Bushies digging in.