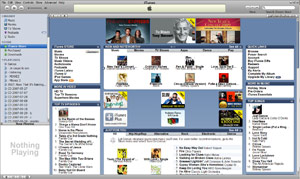 In a quietly revolutionary move, the world’s biggest online music retailer announced today that they’ve managed to please just about everybody except those of us wanting a little footsie-rub. For music fans, iTunes will soon drop copy protection on every single track they have for sale; for the suits, iTunes has finally given in to a longtime record label demand for variable pricing. You give a little, you get a little. Actually, I suppose I shouldn’t call this “revolutionary” since Amazon.com’s ugly-but-functional mp3 store has been doing the same thing for about 16 months now (and don’t forget about the dance-music-centric Beatport, who will even sell you a big ole wave file if you want). But Apple is undeniably the biggie, and their abandonment of D.R.M. (“digital rights management”) software means you’ll be able to happily do whatever you please with your purchased songs, the same way you can with your… er… not-so-purchased ones. The pricing system will be three-tiered: music you don’t really want for 69 cents, music you kind of want for 99 cents, and brand new tunes you just gotta have will cost $1.29. See how that works?

According to the New York Times, everybody’s happy:

Music industry watchers widely applauded the move and said it could help digital music sales, which have shown signs of slowing just five years after Apple introduced iTunes. In particular, lower prices for some songs could spur consumers “to buy deeper into the catalog, and expand their relationship with digital music,” said Russ Crupnick, an analyst with the NPD Group. … Industry pundits have long pointed to D.R.M. as one culprit for the music companies’ woes, saying it alienated some customers while doing little to slow piracy on file-sharing networks.

I went over to iTunes a minute ago and looked at their top 100 selling tracks, from Lady Gaga to The Game, and for now, all tracks are still selling for 99 cents. But if you go look at the albums, you’ll see “iTunes Plus” (what used to be their higher-quality category) comes up automatically. I bought Kanye West’s “Heartless” for 99 cents, and then went and looked at the file. It has an “m4a” extension, which means no copy protection, “m4p” files are the protected ones. I opened up CD Architect and dropped the file into a new project, and blam, there it is, good to go, in 256 kbps hi-fi sound, ready to burn onto a CD or do whatever I want with. Fun! So, um, anybody want to share my Kanye West song?