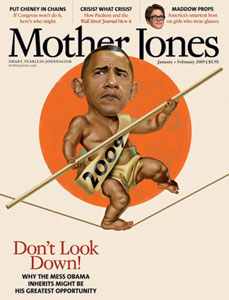 When we started developing Mother Jones‘ January/February 2009 cover, we were looking for a way to depict President-elect Barack Obama in a lighthearted way, while acknowledging the mammoth task he has ahead of him the minute he assumes office. After rejecting numerous ideas, including one of Hercules shoveling dung out of the Augean stables (you’re welcome!), we were intrigued by the image of Obama as an innocent New Year’s baby (the thinking being that “innocence” can mean “not guilty” of said mess, but can also imply “inexperienced.”)

I arrived at Norman Rockwell’s predecessor at the Saturday Evening Post, illustrator J.C. Leyendecker, who blogger Charley Parker claims to be the source of the New Year’s baby metaphor. Aside from having developed the “Arrow shirt man” (reportedly a likeness of Leyendecker’s partner of 48 years, Charles Beach), and Saturday Evening Post covers throughout the first half of the 20th century, it seems that Leyendecker created the New Year’s baby image for a 1908 Post cover and continued to explore variations on that theme until his very last cover, on their January 2, 1943, issue.

The American Art Archives site points out that there’s a tradition of homages to Leyendecker: 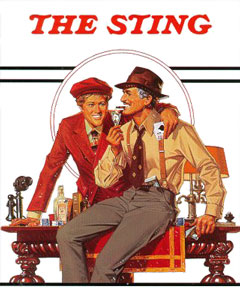 The poster art for the film The Sting
owed a lot to Leyendecker, and that poster itself was parodied by Norman Mingo for Mad magazine. 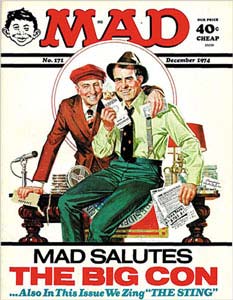 For our purposes, we were particularly intrigued by a 1935 cover on which a nervous-looking baby walks a tightrope in an effort to balance the budget. 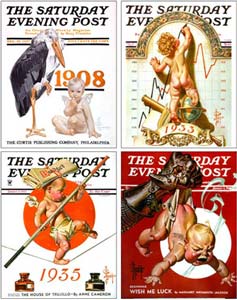 To develop our Obama baby, I chose illustrator Dale Stephanos; his characters have a strong presence on the page and fine-tuned expressions, featuring dramatic lighting that sometimes looks as if it comes from inside the subject. He sketched Obama with several expressions and at one point tried a top hat; the sketch we finally chose shows our intrepid harbinger balanced but understandably nervous as he begins to take his next step.