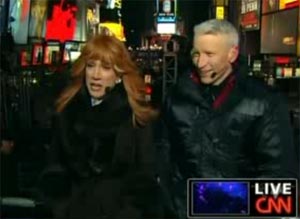 Comedian Kathy Griffin is making news for uttering an expletive during CNN’s New Year’s Eve broadcast, which the D-lister hosted with Anderson Cooper. The network’s enemies are having a field day. Here’s how the New York Post described the moment:

Comedienne Kathy Griffin may be doomed to life on CNN’s S-list after answering a heckler with a shrieking, vulgar tirade during the network’s live New Year’s Eve broadcast.

The raunchy exchange, which occurred well after the ball dropped at midnight, was received with guffaws by the camera crew.

That’s because everyone at CNN is a godless, liberal heathen, right, everybody? Actually, if you watch the clip (which you can do after the jump) it’s clear she was responding sarcastically to good-natured ribbing, not a “heckler,” and I’d say the “shrieking” part is debatable, too. Either way, we watched CNN’s coverage New Year’s Eve before heading out for DJ gigs, and honestly, the almost-always-hilarious Griffin was the best thing about that sloppy, nonsensical broadcast—can someone teach them how to avoid the talk-over-each other problem during live remotes? Also amusing: watching both Griffin and drag queen Sushi (live from Key West!) hold themselves back from making gay jokes about Cooper. Do you think they sign a contract?