The 44th president’s official website was apparently “fired up and ready to go” before he took office. At precisely 12:01 pm EST, the White House web page that greeted Americans for most of the 21st century was no more. In its place was a very change.gov-esque replacement: 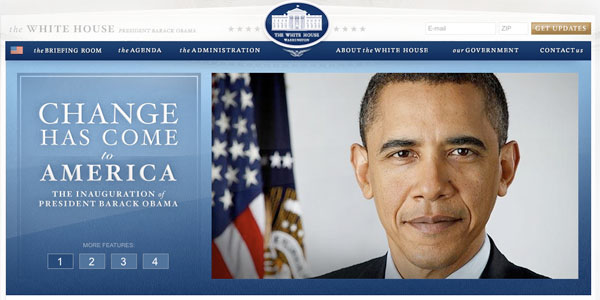 Users of barackobama.com or change.gov will immediately recognize those sites in the new WhiteHouse.gov. The new site features the latest in Obama-style web design: lots of white space, lots of logos, lots of small caps, and lots of Gotham, the font that his campaign made famous. It also includes a sexy front-page slide show to display multiple top stories (just like MotherJones.com!), a front-page blog (with an RSS feed!), and a promise that “WhiteHouse.gov will be a central part of President Obama’s pledge to make his the most transparent and accountable administration in American history.”

In contrast to the Bush administration, which has fought tooth and nail against watchdog groups trying to force the preservation of its records, the new administration is already showing a remarkable willingness to comply with federal record-keeping laws. In an email to reporters sent late in the day on Monday, Spokesman Reid Cherlin wrote (emphasis added):

Because the Presidential Transition office will be closing before our press department has access to email addresses in the White House, we ask for your patience as there will be a period of time tomorrow when it will be a bit more difficult to receive information and to contact us. To that end, we have created interim email addresses where you will be able to email us, which can be found below. Any message sent to these accounts could be forwarded to White House accounts and subject to the Presidential Records Act.

When the Republican National Committee created non-White House email addresses for the Bush administration, those emails were never forwarded to White House and many were apparently “lost”—an apparent violation of the Presidential Records Act that will apparently keep the vast majority of emails sent by the likes of Karl Rove out of the public record. But all indications are that President Obama is not too concerned about his emails eventually becoming public. In Tuesday’s Los Angeles Times, transition chief John Podesta writes that Obama should get to keep his BlackBerry email device, saying, “Let the man have his BlackBerry”:

An off-line Obama isn’t just bad for Barack. It’s bad for all of us. The president’s ability to reach outside his inner circle gives him access to fresh ideas and constructive critics; it underscores the difference between political “victories” and actual solutions; and it brings the American people into a battle we can only win by working together.

I hope Obama can take the attitude Podesta has about his BlackBerry and apply it throughout government. Making WhiteHouse.gov more than just a place for press releases and photo ops would be a great place to start. How about bringing the transition’s “Open for Questions” feature over to the new site? Just asking…

Update: I’m not the only one noticing the changes. Over at Slate, Farhad Manjoo notes that Obama plans to keep a crucial campaign promise: posting non-emergency legislation on the White House website for five days and allowing (and reviewing) comments. Manjoo also noticed some bugs: “A flashy slide show of past presidents fails to include anyone past Gerald Ford” and “when you Google George Washington, Abraham Lincoln, FDR, or any other past president, you get now-broken links to their bios on the White House site.” Let’s hope the White House webmasters get all that fixed—we wouldn’t want FDR falling in those Google ratings.

Update 2: Speaking of Google ratings, Jason Kottke points to the new website’s robots.txt file, which tells search engines what parts of the site to include in results, as “a small and nerdy measure of the huge change in the executive branch of the US government today.” The Bush administration’s version of the robots.txt file had 2400 lines of code for what it didn’t want people finding on Google. The Obama administration has one.